DUBAI/LONDON (Reuters) - Tomato paste is not the most obvious economic indicator, but in Iran, where it is a staple that some people have started panic-buying, it says a lot about the impact of renewed US sanctions.

While Iran makes its own paste from an abundant crop of locally grown tomatoes, sanctions reimposed by US President Donald Trump since August have played havoc with supply.

A 70-per-cent slide in the rial this year has prompted a scramble for foreign currency that has made exports much more valuable in local terms than selling produce at home.

Some shops are limiting purchases of tomato paste, which is used in many Persian dishes, and some lines have sold out as people buy up existing stock.

The government has responded by banning tomato exports, one of a raft of interventions to try to limit economic instability that has fuelled public protests and criticism of the government this year.

But the tomato policy is not working. An industry representative said tomatoes were being smuggled abroad.

"We have heard that trucks full of tomatoes are still leaving the country, especially to Iraq," Mohammad Mir-Razavi, head of the Syndicate of Canning Industry, said by telephone.

"They put boxes of greenhouse tomatoes on top and hide normal tomatoes at the bottom," he said, referring to an exemption for hot-house grown tomatoes that left a loophole.

It is one of many ways in which the sanctions are hurting ordinary Iranians while benefiting those with access to hard currency.

Washington reintroduced steps against Iran's currency trade, metals and auto sectors in August after the US withdrawal from a deal that lifted sanctions in return for limits on Iran's nuclear programme.

Trump said the deal was not strict enough.

With US curbs on Iran's oil exports set to come into force next month (Nov), some Iranians fear their country is entering an economic slump that may prove worse than the period from 2012 to 2015, when it last faced major sanctions.

"There is an emerging consensus that the economy will go through a period of austerity similar to that recorded during the Iran-Iraq war," said Mehrdad Emadi, an Iranian economist who heads energy risk analysis at London's Betamatrix consultancy. 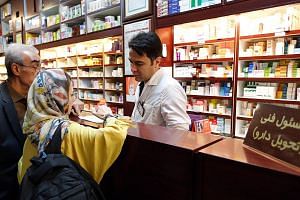 ICJ: Sanctions on Iran must not hit aid

Jumps in prices are occurring in a range of goods - particularly imports such as mobile telephones and other consumer electronics, but also some staples.

An 800g can of tomato paste was selling in Tehran stores for around 60,000 rials in March; it is now 180,000 rials, or US$1.24 at the unofficial rate, prompting a scramble by households to stock up. The price of tomatoes has increased more than five-fold compared to last year.

Signs on the shelves of some stores limit each customer to two cans. Iranian online shopping site Digikala lists the top nine tomato paste items as out of stock, and the rest as "coming soon".

In supermarkets in Najaf in neighbouring Iraq, meanwhile, supplies of Iranian tomato paste are plentiful.

Adding to the pressure is a fourfold rise in the price of cans, Mir-Razavi said.

Traders importing material to make cans sought to buy dollars at a little-used official rate of 42,000 rials; authorities asked them to use a more expensive rate. The issue has delayed shipments of material to factories.

The government is mounting a campaign against price-gouging, periodically ordering shopkeepers to sell at lower prices. But some shopkeepers respond by not selling at all, believing prices will eventually rise again as the sanctions bite.

Iran, a big oil producer with a diverse economy, has shown its farming, manufacturing and distribution sectors can ride out long periods of war and sanctions.

The Tehran Stock Exchange index has soared 83 per cent this year as shares of exporting companies have rocketed.

Urban real estate prices have also risen as Iranians plough their savings into property rather than keeping them in depreciating rials.

The rial's plunge, which in the unofficial market has taken it to around 145,000 against the dollar from 42,890 at the end of 2017, according to currency tracking website bonbast.com, may even have strengthened the financial system in one way.

Banks and pension funds have been struggling with massive debts.

Emadi said the rial's slide, to as low as 190,000 in late September, had given the government huge windfall profits on its dollar holdings; authorities appear to have injected some of those profits into insolvent banks to shore them up, he said.

But while official data for the last few months has not yet been released, Emadi said he believed the economy was already in a recession that could deepen in coming months.

Iran says oil deal with Europe is close, despite US threats of sanctions

The International Monetary Fund predicted this week that the economy would shrink 1.5 per cent this year and 3.6 per cent in 2019, before recovering slowly.

That would make the slump less deep than the recession of 2012, when the economy shrank over 7 per cent, and not nearly as damaging as the Iran-Iraq war of 1980-1988, when it shrank by about a quarter.

The IMF also forecast the average inflation rate would jump to a peak above 34 per cent next year, briefly returning to its level in 2013.

How much the current recession resembles past periods of economic pain for Iran will depend on the extent to which Washington can use the sanctions to push other countries into cutting oil and non-oil trade with the Islamic Republic.

U.S. officials have said the sanctions will be tougher than the steps in 2012-2015. They aim to reduce Iranian oil exports more sharply, and to disrupt exports to Iran from trading hubs such as Dubai more aggressively.

"I think the return of the sanctions has had a devastating effect on their economy and I think it's going to get worse,"Trump's national security adviser John Bolton told Reuters in late August.

But Emadi said that if European nations succeeded in creating a special payments system permitting trade with Iran to continue, and if Tehran cracked down on endemic corruption, the economy might start recovering gradually a year from now.

In the meantime, many Iranians may continue to struggle with surging prices and an unstable currency.

Peyman Mohammadian, 28, an unemployed university graduate in the western city of Andimeshk, said he had tried to protect 5 billion rials in savings by converting them into dollars last month at a rate of 183,000.

Since then, the rial has partially rebounded as authorities have sold dollars to support it and threatened currency speculators with arrest. Mohammadian said this left him in a quandary.

"On one hand, I want the dollar to rise so I don't lose my money. But on the other hand, I want it to drop below 100,000 - otherwise inflation will be so high that I won't be able to get married for 10 years."