LONDON (REUTERS) - British police on Friday (Nov 29) shot dead a man who had strapped a fake bomb to his body and stabbed a number of people in what they said was a terrorism incident in the London Bridge area of the capital.

Following are some deadly attacks in Britain in recent years:

A British man drove a van into Muslim worshippers outside a London mosque, leaving one dead and injuring many more. The man convicted of murder said at his trial he had tried to kill as many as possible.

Three attackers rammed a van into pedestrians on London Bridge, then stabbed people in nearby bars, killing eight and injuring at least 48 before police shot all three dead.

A suicide bomber killed 22 children and adults and wounded 59 at a packed concert hall in the English city of Manchester, as crowds began to leave a concert by US singer Ariana Grande.

Police said they believed Salman Abedi, a 22-year-old Briton born to Libyan parents, had built the bomb himself in the days before the attack.

An attacker stabbed a policeman close to the British parliament in London after a car ploughed into pedestrians on nearby Westminster Bridge. 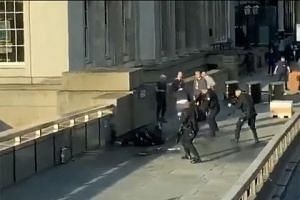 London Bridge terror attack: What we know so far

Six people died, including the assailant and the policeman he stabbed, and at least 20 were injured in what police called a"marauding terrorist attack".

Armed with a sawn-off rifle and a dagger, a man shot and repeatedly stabbed the lawmaker Jo Cox in a frenzied street attack in her constituency in northern England that stunned Britain a week before the European Union referendum.

Two attackers drove into and knocked down a British soldier as he crossed a street in broad daylight in southeast London, before killing him with a meat cleaver and knives.

The murder gained international notoriety when one of the attackers was filmed by passers-by standing in the street with blood-soaked hands trying to justify the attack.

Four young British Muslims detonated homemade bombs hidden in rucksacks on three underground trains and a bus during the morning rush-hour, in the first suicide bombings by Islamist militants in western Europe.

They killed themselves and 52 other people and wounded around 700 others.