SINGAPORE - Ongoing construction works at Knightsbridge mall on Orchard Road appear to indicate that Apple fans can look forward to a November opening for the first Apple Store here.

Among the photos published on dedicated Apple news site 9to5Mac on Wednesday (July 27) was one of an information board at the site, which listed the expected date of completion to be Oct 31.

The photos also showed significant work underway on the first to third floors of the mall.

Local Apple blog My Apple Singapore, which has been tracking the store's progress since last November, also noted in a post on July 21 that it had made "substantial progress".

It observed that the white canvas at the front of the mall had been removed, which suggested that works were now focused on the installation of its "front facing huge glass panels like other renowned Apple Stores around the world".

Wooden crates marked with the logo of German glass manufacturer Seele, which typically provides the glass panels for Apple Stores around the globe, were also seen placed outside the mall. 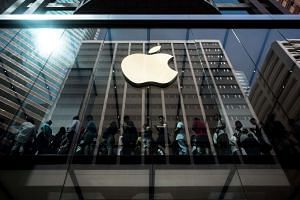 Plans for the store were first leaked last October, when a former tenant at Knightsbridge, Pure Fitness, sent e-mails to its members saying it was closing to make way.

While the tech giant had since confirmed it was opening a store in an interview with The Straits Times last November, it declined to reveal the store's location, its opening date, or how many people it was planning to hire.

The store will run entirely on solar energy.