TOKYO (REUTERS) - Olympic figure skating champion Alina Zagitova on Friday (March 22) claimed yet another crown by winning the world title, overcoming an uneven season by soaring to a commanding win with an ambitious programme that left the Russian in tears.

Second-place finisher Elizabet Tursynbaeva of Kazakhstan also made history by being the first woman to successfully land a quad jump in senior international competition and the first woman from her nation to claim a world championship medal.

Zagitova, who finished fifth at last year's edition after a disastrous free skate and then endured a difficult season, struggled to hang onto a few of her jumps in an otherwise dynamic routine that included seven triple jumps.

In first place after the short programme, Zagitova wept in the arms of her coaches after coming off the ice from her free skate but was smiling by the time her score was posted, 155.42 for a total of 237.50 - less than a point under her world record.

"There were many hard times, but I'd like to thank the audience and everyone else who supported me," she said at the Saitama Super Arena.

"Japan always welcomes me warmly," the 16-year-old - who has a Japanese Akita dog as a pet - added. "Because of everyone's support, I was able to achieve this."

Tursynbaeva claimed silver with a flowing skate that kicked off when she successfully landed a historic quadruple Salchow.

"I still cannot believe I won the silver. To tell the truth, during the practice session I was feeling weird," she said.

"I am glad that after all I managed to focus on my performance and am pleased that I landed the quadruple Salchow."

The women's competition threatened to be overshadowed by an incident in practice on Wednesday when American skater Mariah Bell made contact during the warm-up with South Korean rival Lim Eun-soo, leaving her with a cut leg.

But the International Skating Union (ISU) ruled that the accident was unintentional and Korean skating officials said the two might meet later on Friday so Bell could apologise. 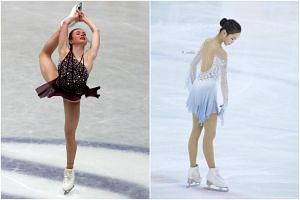 In ice dance, reigning world champions Gabriella Papadakis and Guillaume Cizeron of France took a decisive step towards a fourth crown after clinching a strong lead with an elegant tango-themed rhythm dance.

Skating last before a packed house, the Olympic silver medallists - who narrowly missed gold at Pyeongchang after a mishap with Papadakis' costume in the short programme - were awarded 88.42 points for their sultry routine.

"We're very pleased with this performance, because we skated really well. We love this programme, we love the choreography, we love working on it," she said.

The championships conclude on Saturday with the ice dancing final and the keenly watched men's final, with American Nathan Chen in the lead after the short programme.