SINGAPORE - Retiree Lee Kok Leong, 75, has been diligent about all the measures meant to keep people in his age group and others safe from Covid-19, but it has been more than 18 months and he is tired of staring at the walls in his home in Bedok.

Fully vaccinated with Pfizer since April, Mr Lee, who lives with his wife, said he now goes out every day for one to two hours.

"I reduce my time outside, but if you are confined at home for the whole day, it is very stressful. My wife scolds me and tells me to cut down my time spent outside," he said, adding that before the pandemic, he would be out with friends for at least half the day.

He knows the virus has been hard on those older than 60, though he is not sure of the numbers.

Between Sept 27, when Singapore tightened restrictions amid a spike in infections, and Oct 10, 83 people have died from Covid-19 complications - more than half of all who have succumbed to the virus since last year. Of the 83, 79 were those above the age of 60.

But it is not just the mortality rate. Seniors have consistently made up the majority of Covid-19 patients warded in hospitals, those needing oxygen supplementation and patients who require intensive care.

Mr Edward Tang, who works as a zone supervisor for Care Corner Seniors Services, said many seniors acknowledged that it is unsafe to be out, given the high case numbers. But staying at home would deprive them of social engagement.

"Many of their interactions take place in outdoor venues such as void decks, coffee shops, markets, and Senior Activity Centres.

"As it has become a core and integral part of their routine, asking them to change these habits within a fortnight requires them to make adjustments and seek alternative means of staying engaged with their social network," he said.

Over the last week, The Straits Times spoke with 50 seniors in areas such as Chinatown, Beach Road, Waterloo Street and Kampong Glam. Most say they limit their time away from home, with 22 indicating they would only go out when absolutely necessary.

But eight of them said lethargy from following all the rules has set in. They are fully vaccinated, with some waiting for their booster shot, and feel they can stay safe if they stay away from crowds.

Living alone in a one-room rental flat at Chinatown means it is hard to spend his days indoors, said Mr Chng Boon Sing, 73.

The former labourer, who is waiting for his booster shot, sits at the nearby Kreta Ayer Square almost every day, mostly alone, because people are avoiding the area out of fear.

Dr Chew Yat Peng said some seniors may have errands to run, such as going to the market to buy food so that they can cook for themselves.

The principal counsellor at O'Joy Care Services, a voluntary welfare organisation that provides counselling and case management to seniors, added: "Maybe then we have to encourage them to find more than one goal.

"For some of the elderly, their daily trips to the nearby market are a precious habit and they may treasure this kind of routine. In that case, it may be better to go out once every two days or something. Any reduction would be better."

If I were to stay home all day, I think I will become senile, says elderly S'porean

She added that many seniors live on their own, but they are not just feeling lonely and finding ways to fend off the boredom.

"Some of the elderly are concerned that something might happen to them while they are at home alone, and their families try to resolve that by installing closed-circuit television cameras," said Dr Chew.

Isolation can lead to other problems. For some ST spoke to, WhatsApp messages from friends have been their main source of information surrounding the pandemic.

Like Mr Jeswant Singh, 68, who is avoiding the booster shot because he saw messages claiming people developed problems because of it.

Mr Lee said he heard from friends that the Sinovac vaccine is better, and has decided to wait for that for this third dose. "According to the Chinese physician, most of them also wait for the Sinovac, they said that the things that are injected are not live viruses," he said.

Professor May Lwin, who is co-director at the Communication in Healthcare @ NTU (COHEN), an interdisciplinary research group at Nanyang Technological University, said while technology can help to close the social gap for seniors, it has also been a channel for misinformation about the pandemic.

For some S'porean seniors, need for income means having to leave home for work

"In general, the elderly tend to have lower digital literacy levels, which includes the ability to use communication technology to source, evaluate and communicate information," noted Prof Lwin, who added that seniors are more likely to depend on traditional forms of media such as television in order to receive information.

But with apps such as WhatsApp or Telegram, seniors are particularly vulnerable to misinformation.

"They (seniors) are unaccustomed to receiving information on newer platforms and therefore lack the skills to question the veracity of digital information received."

She said research is showing that well-directed governmental efforts - including public communication customised to target segments - and the sharing of reliable information by trusted parties are key to enhancing literacy regarding the pandemic. These trusted parties could relay messages on social media by word of mouth or during doctor consultations, for example. 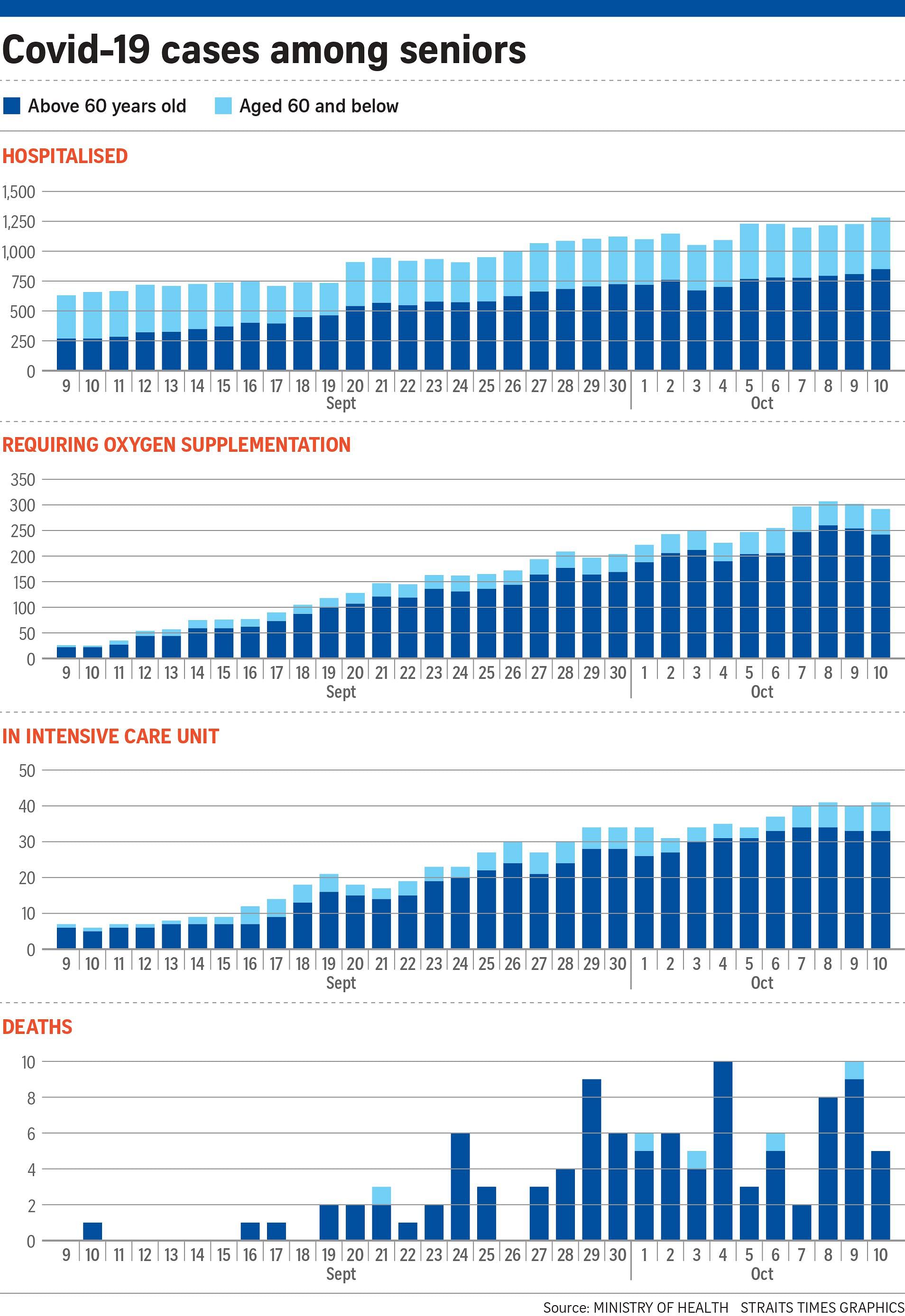 "In the longer term, I believe that such health literacy skills will need to be taught early in everyone's educational journey."

With close to 80,000 seniors still unvaccinated, the Government has employed various measures to keep them safe, including home vaccination visits by teams which administer vaccines to those who are immobile or homebound.

At the press conference on Oct 2 held by the multi-ministry task force tackling the pandemic, Health Minister Ong Ye Kung reiterated that it is important for seniors who are unvaccinated to reduce their social activities and movement, and for family and caregivers to avoid infecting them with the virus inadvertently.

Seniors stuck at home, caught between loneliness and fear of Covid-19

'It's like being in prison': Seniors say it's hard to stay at home despite latest advisory

Waiting for customers at his stall along Aliwal Road, barber Tan Boon Kee, 76, said that for him, getting vaccinated was not so much about his health but obeying the rules.

"Whether or not you're vaccinated, you will die some day. At least if you get it, you won't get scolded by others," he said.