It's not so much goodbye as see you later. When Agency for Science, Technology and Research (A*Star) chairman Lim Chuan Poh's retirement from public service was announced recently, speculation was rife as to where the career public servant of 38 years would go next.

In fact, the former defence force chief, 57, will continue protecting Singapore - albeit from a more insidious threat.

He will oversee food security as chairman of the new Singapore Food Agency (SFA), the statutory board tasked with all food-related functions here from next month.

And the agency will harness the research and talent that he has spent the last 12 years - "a whole zodiac cycle" - building up, in his term helming the country's largest public-sector research agency.

Under his watch, the research and development landscape here has grown.

In 2017, for instance, 93 of the top companies that partnered A*Star contributed $4 billion to the country's total business expenditure on R&D. And the year before, biomedical sciences manufacturing accounted for some 4 per cent of Singapore's gross domestic product, employing over 20,000 workers.

"The food story is one of the new growth opportunities," he said.

Some things cannot be rushed. You just have to do it right. If we sustain the efforts, it will happen.

MR LIM CHUAN POH, acknowledging that no blockbuster drug has yet emerged from Singapore's research drive, and expressing confidence that this will happen.

If you stay focused on the people, you will do the right thing.

MR LIM, on his main takeaway after nearly four decades in the public service.

"It will be made possible through our sustained investment in research, and aligning it with this whole concern with sustainability."

With climate change threatening crops worldwide, Singapore is shoring up its efforts in food production. It aims to produce 30 per cent of the food needed here by 2030.

Just as the country's investments in advanced manufacturing had paid off handsomely, this same focus on intensive, high-tech solutions would also transform agriculture here, he predicted.

"We're very strong in advanced manufacturing, we're No. 5 in the world for manufacturing value-added and we produce four of the top 10 drugs in the world. These same capabilities are what you need to transform agritech."

The strong research climate has given the nascent effort a head start. Already, he pointed out, A*Star scientists have created a company that aims to produce meat grown in the laboratory, and researchers here are also harnessing insects as a rich source of protein for feed stock.

"We want Singapore to be the hub in this part of the world for all these things to be demonstrated and accepted, and for it to grow and scale up," said Mr Lim, who added that he will spend about one-third of his time in his role as non-executive chairman of SFA, but has not committed to a full-time job yet.

Leaving A*Star, he said, will allow for public-service leadership renewal, and a fresh pair of eyes and fresh minds to take research to the next level.

"Compared with 12 years ago, I think we've made a remarkable push, and we are now showing the fruits of what happens when you collaborate through joint research efforts across the wider landscape."

Acknowledging that no blockbuster drug has emerged from Singapore's research drive yet, he said he had full confidence this will happen, and noted that drugs were being tested in clinical trials.

Singapore-based biotechnology firm Tessa Therapeutics, for one, is ahead in the race to turn cancer patients' own immune cells (T-cells) against tumours in their bodies. It is conducting the world's first and largest US Food and Drug Administration Phase Three cancer T-cell therapy trial.

"Some things cannot be rushed. You just have to do it right. If we sustain the efforts, it will happen."

But the importance of staying the course does not mean "continuing with the same investments and the same set of people from beginning to end".

In his tenure, widespread changes to the funding structure of A*Star institutes caused anxiety among scientists. Amid the evolving research landscape, researchers looking to collaborate with the industry were given a higher percentage of core or guaranteed funding, while those involved in more upstream research had to compete harder for funding.

Mr Lim said the changes were an ongoing process of evolution, and industry observers have said they were a result of the need to be nimble and to spur competition.

As he looked back at almost four decades in the public service, three examples stood out for him as to the overarching purpose of leadership.

One was waiting at the finishing line as his men completed a 2.4km run for a fitness test, as a battalion commander in 1990.

"This soldier crossed the finishing line in nine minutes and 44 seconds, making it to gold and monetary award with one second to spare, before collapsing into my arms. He was exhausted but he was okay. I found out that he had failed his IPPT in his first year."

The second was when he was permanent secretary at the Education Ministry from 2003, and learning that some pupils who failed their Primary School Leaving Examination (PSLE) were falling through the cracks because they 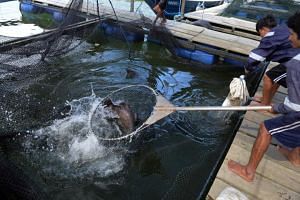 New stat board Singapore Food Agency to be formed in April 2019; AVA will cease to exist

had to wait until they were 14 before entering the vocational institute.

"This was the genesis of NorthLight School," he said, referring to the school set up in 2007 to keep pupils who do not do well in the PSLE engaged in their studies.

The third was when he gave an A*Star scholarship for the first time to a candidate formerly from the EM3 stream - for those who were academically weakest - and who is now an A*Star scientist.

All three examples showed him one thing, he said. "If you stay focused on the people, you will do the right thing," he said.

"You can't find a more contrasting situation between a world-class research agency and NorthLight, yet it is all about giving opportunities and giving hope, showing them they can have a better tomorrow, and that they can shape a better tomorrow for themselves and for Singapore."