Many underestimated their peers' ability to recognise fake news - only one in three of them believed other Singaporeans were able to do so, while about half of all respondents said they were confident of their own ability to discern fake news.

These findings of a poll on public attitudes towards fake news, conducted by government feedback unit Reach, were released on Monday (March 26).

Asked how often they came across online news that they thought was "not fully accurate", three in four of those surveyed said they had done so at least occasionally. This could also include news reports with genuine errors that were later corrected and clarified.

Four in 10 of the respondents who said they had seen inaccurate news reports online said they had encountered fake news related to Singapore in the past year since the date they were surveyed.

Of this group, seven in 10 said they could not recognise that the news was fake at the time that they read it. The survey did not address whether they later verified the news reports that they read by cross-checking it with other sources.

About eight in 10 respondents said they were concerned about individuals or companies who were profiting from fake news that was put out deliberately, and supported strengthening laws to deal with the spread of false information.

Even more - nine in 10 - felt there should be more effective laws to require those who publish fake news to remove or correct these reports.

A similar proportion also said those who publish fake news deliberately should be prosecuted "if their actions have serious consequences".

About 68 per cent of respondents said mainstream media such as newspapers and television broadcasts were their main sources of news and current affairs, while 32 per cent relied on social media and 6 per cent on mobile messaging services.

The survey respondents were randomly selected, and the sample was weighted by gender and age to ensure that it was representative of the national population.

The Reach survey findings come as a parliamentary committee is conducting public hearings to look at ways Singapore can tackle deliberate online falsehoods. 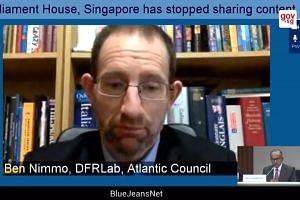 UK expert says legislation is tricky as it is hard to define fake news, but Shanmugam disagrees

Chaired by Deputy Speaker Charles Chong, the 10-member Select Committee received more than 160 written representations and invited more than 70 individuals and representatives of organisations to give evidence before the committee.

Five days of hearings have been completed so far since the proceedings began on March 14.

Some academics have pointed out that there are gaps in Singapore's legislation to deal with this issue of online falsehoods, which range from fake news for commercial purposes to state-sponsored disinformation campaigns with political aims.

Meanwhile, technology giants such as Facebook and Google argued against new legislation, saying a multi-pronged approach should be adopted.

Media representatives from Singapore Press Holdings and Channel NewsAsia said that legislation should not be too broad and sweeping to the extent that it hinders the work of those in the industry.

The last three days of hearings, which will start on Tuesday and end on Thursday, will likely see historian Thum Ping Tjin and human rights group Maruah giving oral evidence, among others.