SINGAPORE - Many of the payments made by a Workers' Party-led town council were not improper, and should not be recovered even if they were.

This argument was laid out on Tuesday (Oct 9) by Senior Counsel Chelva Rajah, the lawyer defending five WP town councillors in a multimillion-dollar civil suit over an alleged breach of fiduciary duties.

On the second day of cross-examination, Mr Rajah pressed KPMG executive director Owen Hawkes on why he had classified almost $200,000 in payments to managing agent FM Solutions & Services (FMSS) and service provider FM Solutions and Integrated Services (FMSI) as "unsupported by certifications of services received or contracts".

KPMG was appointed to look into Aljunied-Hougang Town Council's (AHTC) books after the Auditor-General's Office found significant governance lapses in a special audit.

Mr Rajah argued that some of these funds were paid out because FMSI had existing contracts with Hougang Town Council, which were naturally carried over to the new AHTC after the merger with Aljunied Town Council following the 2011 general election.

Also, many of these payments were for services that had actually been rendered, such as those for emergency maintenance.

But Mr Hawkes said there was no documentation showing that these services were carried out satisfactorily. Neither was there any contract to define what "satisfactory service" would look like.

Mr Rajah said the town council's call logs were proof that cases were heard and responded to. 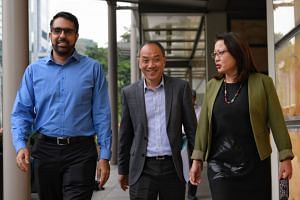 AHTC trial: Invoice of over $106,000 paid to FMSS not improper, says defence

Mr Hawkes replied: "It's a call log, and I don't know what is your experience with call logs, but they are not 100 per cent with (seeing a case through)."

Later, Mr Rajah sought to determine if Mr Hawkes thought the payments should be recovered if services were provided satisfactorily.

Mr Hawkes said that he was not living in the GRC at the time, and that the documentation to prove that the services were carried out well was not there.

"I have never said this is a wrongful payment. The language is improper payment, made in breach of the Town Council Financial Rules... We don't say if it should be recovered or not recovered," said Mr Hawkes.

Mr Rajah also took issue with KPMG classifying $80,000 in payments to FMSS as a breach of financial authority made without the co-signature of either the chairman or vice-chairman of the town council.

Said Mr Hawkes: "The breach is on the basis of a standing instruction, not a (violation of) the Town Council Financial Rules."

Mr Rajah asked: "Is that in your view how an independent accountant should approach these sort of payments?"

Mr Hawkes replied: "We compared the payments made by AHTC and it appears they were not followed. That is our job."

Asked multiple times by Mr Rajah if he thought this money should be recovered, Mr Hawkes finally said: "It's not a yes or no."

"We are not saying that every amount in our table is to be recovered, that's why part of the table says (the amount is) indeterminable."

In total, KPMG identified over $1.5 million in payments as improper in its November 2016 report. Just over $600,000, it said, should be recovered. The rest were indeterminable.

The trial continues after lunch.