SYDNEY (AFP) - Australian shoppers need to back farmers besieged by a contaminated fruit scare, Prime Minister Scott Morrison said on Thursday (Sept 27) as it emerged that Singapore's largest supermarket chain had put a halt on all strawberries from Down Under.

Mr Morrison outlined tighter export controls as the crisis - which has seen pins and needles inserted into fruit across the country - spread further overseas.

The PM detailed several government-backed measures to restore confidence in the industry, including funding to review tamper-proof packaging options, and the recent introduction of X-rays and shrink wrapping on exports.

"There's work also being done to support communications up through the supply chain into our international markets," he told reporters at a farm in the north-east state of Queensland.

The industry is reeling as a string of incidents over the past few weeks - many of them a copycat hoax - unnerved grocery shoppers and have police struggling to find the original offender.

The crisis has spread overseas too. Last week, a needle turned up in a punnet of Australian strawberries in New Zealand, prompting the authorities there to employ extra screening measures.

And on Thursday, FairPrice, Singapore's largest supermarket chain operator, confirmed it had put a halt on all strawberry imports from Australia from Sept 24 as a "precautionary measure". 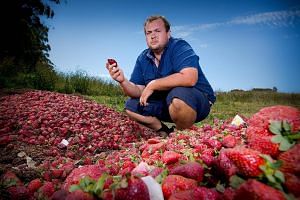 NTUC FairPrice stops strawberry imports from Australia; AVA in touch with authorities there

Strawberry sales have declined 10 per cent since the reports of sabotage came to light, the food retailer added.

"We continue to monitor the situation closely, and our food safety protocols and procedures are also in place should we need to recall any products, in compliance with the authorities' advisories," a FairPrice spokesman told AFP.

But while many farmers have been brought to the brink, the incidents have also set off a public backlash against the saboteurs, with Australians buying strawberries en masse.

"That shows you what's happening in Australia: Australians coming together and responding to a call to say, 'Let's get behind our strawberry farmers'," Mr Morrison said.

"Whoever the idiot was who started this, his idiocy has been completely and totally overwhelmed by the good nature of the Australian people who have stood with our strawberry farmers."

Canberra has notified international markets that since Sept 19, Australian exporters are required to give an assurance that their strawberry shipment is free of metal contaminants before they are granted a permit.