PARIS • Clashes broke out throughout France as an estimated 84,000 "yellow vests" demonstrators took to the streets on Saturday in a 10th consecutive weekend of protests against President Emmanuel Macron's government.

The demonstrations passed off relatively peacefully in Paris where 7,000 turned up, although there were brief scuffles between police and demonstrators in the Invalides district.

Protesters threw firecrackers, bottles and stones at police, who responded with water canons and tear gas to push them back.

"Macron, resign!" some of the protesters shouted.

The "yellow vests" protests - named after the fluorescent jackets French motorists are required to carry in their cars - began in November over plans to raise fuel taxes. The number of demonstrators on Saturday was roughly the same as last week.

The fuel tax hikes were subsequently scrapped, but the movement has morphed into a broader protest against Mr Macron's government and general anger over taxes and the cost of living.

"How can we continue to live with so little?" said Mr Bernard Grignan, a 65-year-old retired manager who took part in the Paris demonstrations.

In Paris, some demonstrators carried mock coffins symbolising the 10 people who have died during the protests, mainly due to accidents when demonstrators blocked roads.

Last month's demonstrations saw some of the worst violence in decades in Paris, as rioters burned cars and vandalised shops. Protests in the capital this month have not seen the same level of trouble, although a video of a former French boxing champion punching and kicking police shocked many. 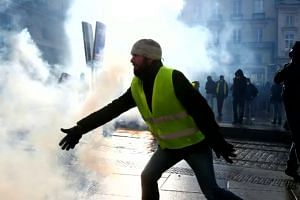 Despite a relative decline in crowd trouble in Paris, however, disturbances have flared up in other cities. According to official figures, the biggest demonstration on Saturday occurred in the southern city of Toulouse, where around 10,000 people took part.

The demonstration turned violent as evening fell, and protesters vandalised a bank and shops. Eight people were injured and there were 23 arrests.

Mr Macron has launched a series of national debates to help quell public discontent and restore his standing.

Far-right leader Marine Le Pen - soundly beaten by Mr Macron in the 2017 presidential election - is looking to take advantage of the "yellow vests" crisis and win ground in May's European parliament elections. On Saturday, she reiterated her support for the protesters at a meeting near Marseille, at which she described the movement as a "legitimate" and "courageous" revolt.

A version of this article appeared in the print edition of The Straits Times on January 21, 2019, with the headline ''Yellow vests' clash with police across France in protests'. Subscribe
Topics:
More
Whatsapp Linkedin FB Messenger Telegram Reddit WeChat Pinterest Print Copy permalink