SYDNEY (AFP) - Australia on Wednesday said official word on whether a washed-up plane part is from missing Malaysian Airlines flight MH370 is expected this week, while reiterating it will continue hunting for the main debris field in the southern Indian Ocean.

Technical experts in France were to begin examining the flaperon, already confirmed to have come from a Boeing 777, in Toulouse later on Wednesday after it washed up on the Indian Ocean island of La Reunion.

"Malaysian and French officials may be in a position to make a formal statement about the origin of the flaperon later this week," said Australian Deputy Prime Minister Warren Truss.

He added that an expert from the Australian Transport Safety Bureau (ATSB), which is coordinating the search for the Malaysia Airlines jet, would be involved in examining the wing part when the case containing it is opened. 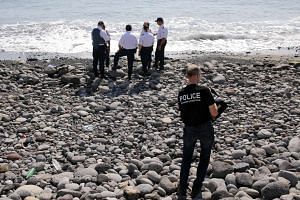 MH370 investigators meet in France ahead of wing analysis 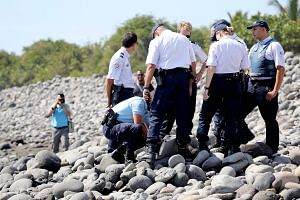 Barnacles on debris could provide clues to missing MH370: Experts

French and Malaysian experts, Boeing employees and representatives from China will also be on hand to determine if it comes from the jet that vanished en route from Kuala Lumpur to Beijing with 239 people on board in March last year.

Truss added that Australia's national science agency, CSIRO, had confirmed that drift modelling showed debris could have been carried by wind and currents to La Reunion, some 4,000km from the region where MH370 was thought to have gone down.

"I am advised that Australia's CSIRO drift modelling, commissioned by the ATSB, confirms that material from the current search area could have been carried to La Reunion, as well as other locations, as part of a progressive dispersal of floating debris through the action of ocean currents and wind," he said.

"For this reason, thorough and methodical search efforts will continue to be focused on the defined underwater search area, covering 120,000 square kilometres, in the southern Indian Ocean."

Australia has been leading the hunt for the plane, with satellite and other data pointing it to coming down in the southern Indian Ocean.

Ships have been scouring more than 50,000 sq km of deep ocean floor for evidence, although none has so far been found.