There are indications Washington may take a tougher stance on the city, say observers

The role that Hong Kong plays in the United States' foreign policy is likely to come under greater scrutiny in the months ahead if ties between the US and China continue to deteriorate, political watchers said.

The US has long treated the territory differently than it does mainland China, but there have been indications of late that Washington might change its stance.

An early signal is perhaps the US-China Economic and Security Review Commission report convened by US Congress.

On Wednesday, it warned that China's technology-manufacturing strength threatens US national security - allegations China has dismissed as moves to contain its rise.

The commission proposed that the Commerce Department reassess whether US export control policy for dual-use technology should still consider Hong Kong and the mainland as separate Customs areas, given Beijing's continued erosion of Hong Kong's autonomy.

Under the US-Hong Kong Policy Act, the US government treats Hong Kong as a non-sovereign entity for domestic law purposes. So, unlike the mainland, Hong Kong is, for instance, eligible to receive controlled US defence articles sold via direct commercial sale.

In a statement issued just before midnight on Wednesday, the Hong Kong government expressed "regret over the biased conclusions and unfounded accusations made in the report", stressing that "foreign legislatures should not interfere in any form in the internal affairs" of the territory.

Mr Douglas Paal, vice-president for studies at the Carnegie Endowment for International Peace, told The Straits Times that "the commission does not usually have much sway over Congress", so the suggestions do not normally translate into much policy impact.

Still, the writing may already be on the wall for a tougher US stance on Hong Kong if the May 29 State Department report on the Act is any clue.

As Professor Harry Harding from the Frank Batten School of Leadership and Public Policy pointed out: "The guarded State Department report on Hong Kong - that there are worrying developments but, thus far, Hong Kong retains an adequate level of autonomy - was clearly a warning shot to both the Hong Kong government and the Chinese central government." 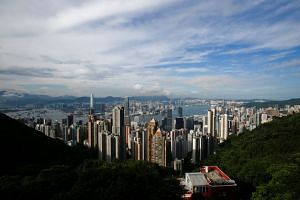 Associate Professor Alfred Wu of the Lee Kuan Yew School of Public Policy believes the US "may be concerned with a pro-Beijing Hong Kong leadership which may consciously advance the interests of China".

He added: "Particularly, Hong Kong may use its own status as a financial centre to help China conquer the difficulties associated with the US-China trade war."

Mr Zack Cooper, research fellow at the American Enterprise Institute, noted that if Beijing continues to "restrict rights and freedoms in Hong Kong, that will make it (China) more of a target, not just for the Trump administration, but for Democrats as well".

Amid all this, doubts about Hong Kong's relevance in the world have risen.

Assistant Professor Evan Resnick, who is also coordinator of the US programme at the S. Rajaratnam School of International Studies, said Hong Kong's "only salience (now) is in the realm of economics", unlike during the Cold War where it also had "geopolitical importance as a British protectorate".

The city's role in the world rose in the Korean War in the early 1950s - the peak of the Cold War - and was the window through which the West and China could gain insight into the other party.

The declining role stems, in part, from the rise of China - its economic size shrank from a fifth of the mainland's total in 1997 to less than 3 per cent now.

Working against the city's international reputation is a growing consensus that Beijing has tightened the leash on the city after 1997, when Hong Kong was handed back to the mainland from British control.

Said Prof Wu: "You can anticipate intervention in Hong Kong policies (going forward) "because they (the mainland) think they are doing very well, so Hong Kong needs to follow them."

He added that Beijing now "only wants Hong Kong to serve the mainland better", so Hong Kong will have to "tolerate" the disadvantages that come with closer integration.

A version of this article appeared in the print edition of The Straits Times on November 16, 2018, with the headline 'What will happen to Hong Kong as US-China ties sour?'. Subscribe
Topics:
More
Whatsapp Linkedin FB Messenger Telegram Reddit WeChat Pinterest Print Purchase Article Copy permalink