The United States will take a cautious approach to the incoming president of the Philippines, say Washington foreign policy experts, even as the administration refused to be drawn on whether it has concerns about the candidate's controversial rhetoric.

State Department spokesman Elizabeth Trudeau was asked at least seven times at the department's daily press briefing on Tuesday if the government had any concerns about Mr Rodrigo Duterte, and each time she would only say that they looked forward to working with whomever the people voted for.

"We look forward to working and congratulating the winner," said Ms Trudeau. "Washington respects the choice of the Philippine people. We gladly work with the leader they have selected."

The Philippine president-elect has made numerous comments about the South China Sea that has raised anxiety among Asia watchers in the US. 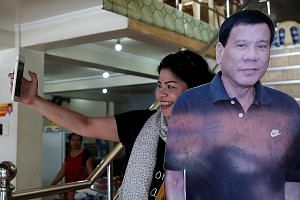 For instance, he has indicated he would be willing to set aside disagreements with China if Beijing were to build the Philippines a railway; he undermined the country's case at the international tribunal by saying he does not believe in solving conflicts that way; and also famously declared he would take a jet ski out to a Chinese-occupied island in the South China Sea and plant a Filipino flag there.

Analysts thus say the US government will likely be watching closely to see if the campaign rhetoric carries over into actual governance.

"There are a lot of unknowns that follow Mr Duterte's election, and American policymakers will be listening closely over the coming days to see how much of his campaign rhetoric was just that, or whether he intends a real shift in policy with respect to China," said Mr Richard Fontaine, president of the Centre for a New American Security.

He added: "The issue for the US is the regional rules-based order and the alliance with the Philippines, both of which are at issue with China's egregious behaviour in the South China Sea."

Dr Zachary Abuza, a professor at the National War College who focuses on South-east Asian politics and security issues, told The Straits Times that the uncertainty Mr Duterte's victory brings will be among the biggest concerns for Washington.

"Like financial markets, in international relations we like to have some predictability. And that's the problem with the Philippine president-elect. He is completely unpredictable," said Dr Abuza.

And until it is clear whether and how Mr Duterte is going to convert his remarks into action, the US administration is likely to continue a stable approach towards Manila and the South China Sea issue.

"I think the US will assume that the close US-Philippines ties, including cooperation on the Enhanced Defence Cooperation Agreement, will continue until Mr Duterte informs Washington otherwise," said Mr Murray Hiebert, senior fellow at the Centre for Strategic and International Studies.

A version of this article appeared in the print edition of The Straits Times on May 12, 2016, with the headline 'US taking cautious approach towards Duterte'. Subscribe
Topics:
More
Whatsapp Linkedin FB Messenger Telegram Reddit WeChat Pinterest Print Purchase Article Copy permalink