South Korea's Foreign Minister Kang Kyung-wha told a news conference yesterday in Seoul that the allies were reviewing various packages of incentives that Washington could bring to the table in the meeting.

While Ms Kang provided few details other than to say they were discussing restarting stalled business projects, the term can cover everything from sanctions relief to moves to formalise the end of the 1950-53 Korean War.

"Between South Korea and the US, we are closely consulting what kinds of denuclearisation measures should be followed and what the US and the international community can do as corresponding measures," she said at a New Year's news conference. She said she expected nuclear talks to pick up speed.

CNN reported earlier that Mr Kim Yong Chol was due to meet US Secretary of State Michael Pompeo in Washington this week.

Negotiations between the US and North Korea have sputtered since Mr Trump and Mr Kim Jong Un signed an agreement during their first meeting in June to "work towards complete denuclearisation of the Korean Peninsula", without defining the phrase or setting any deadlines. 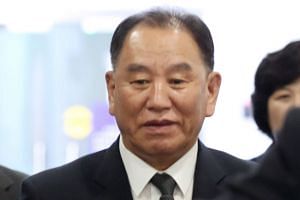 North Korea argues that the deal implied a step-by-step approach, where each of its actions are met by US responses, while Trump administration officials assert that Mr Kim Jong Un accepted his country's "final, fully verified denuclearisation".

The North Korean leader warned in his New Year's address this month that he could be forced to take a "new path" in talks if Mr Trump did not relax sanctions pressure. He pressed for US concessions to reward his decisions last year to halt weapons tests and dismantle some testing facilities, without offering additional steps.

"If the US takes a credible action in response to our proactive and preemptive efforts and responds to the corresponding measures, the relationship between the two countries will move forward at a good and rapid pace through the process of taking more certain and innovative steps is," Mr Kim Jong Un said on Jan 1.

While South Korea was not independently considering resuming cooperation projects at a North Korean mountain resort or the joint factory park in the North, Ms Kang said such moves were part of the "various combination of corresponding measures" being discussed.

"Details of the results will be generated during the negotiations between North Korea and the US," she said.

A version of this article appeared in the print edition of The Straits Times on January 17, 2019, with the headline 'US, S. Korea mulling over incentives for Kim in talks'. Subscribe
Topics:
More
Whatsapp Linkedin FB Messenger Telegram Reddit WeChat Pinterest Print Purchase Article Copy permalink