Questions raised over approval for the 737 Max, given pilots' concerns over software issue

NEW YORK • Was the United States complacent in its certification of the Boeing 737 Max?

That is a question everyone is asking after Addis Ababa said flight recorded data showed "clear similarities" between last week's Ethiopian Airlines crash and that of Indonesia's Lion Air five months earlier.

In service since May 2017, the 737 Max 8, one of several variants of the 737 Max, has now experienced two deadly tragedies, a scenario that is unprecedented for a new aircraft.

The March 10 crash, south-east of the Ethiopian capital, claimed 157 lives, while 189 died when the Lion Air flight plunged into the Java Sea in October last year.

Investigations are ongoing but early evidence has pointed to a problem with the flight stabilisation system designed to prevent stalling, the Manoeuvring Characteristics Augmentation System (MCAS).

Ethiopian Transport Minister Dagmawit Moges on Sunday said a study of the flight data recorder retrieved from the Ethiopian plane had shown "clear similarities" to that of the Lion Air flight.

While it may take months for definitive conclusions, experts are asking why the MCAS was given the green light despite objections by American pilots who had voiced concerns with the system. 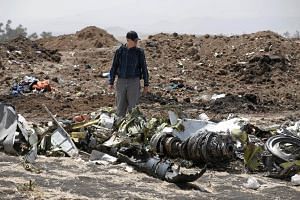 The US Federal Aviation Administration (FAA) is in the line of fire because it authorises the commissioning of airplanes. But for the past decade, it has outsourced the mission, entrusting the task to airplane manufacturers themselves and to external experts.

Under this new programme, known as the Organisation Designation Authorisation, employees of Boeing accredited by the FAA assist the regulator in approving the aircraft of their employer (from design, production, flight tests, maintenance and other systems) as well as signing off on the training procedures of pilots on new planes.

The trend has accelerated due to budget cuts and the rising volume of air travel, industry sources told AFP. In the case of the 737 Max, Boeing expressed a case of urgency because of its medium-haul competition with the Airbus A320Neo that launched shortly before.

The original safety analysis that Boeing delivered to the FAA had "several crucial flaws", the Seattle Times has reported.

There were also strong differences of opinion between FAA staff in Seattle, where Boeing planes are built, and in the Washington DC headquarters, a government source told AFP.

A grand jury in Washington issued a broad subpoena dated March 11 to at least one person involved in the development process of the 737 Max jets, the Wall Street Journal reported late on Sunday.

Boeing CEO Dennis Muilenburg on Sunday said the company was finalising a software update to the MCAS. Industry sources indicated it would be ready in about 10 days.

Congressional sources said Mr Peter DeFazio, the chairman of the House of Representatives' Transportation and Infrastructure Committee, is planning to launch an investigation into the 737 Max's certification.

Following the Lion Air crash, the FAA asked Boeing to modify its flight manuals and training of pilots so that they can recognise and respond to unexpected manoeuvres initiated by the MCAS.

A version of this article appeared in the print edition of The Straits Times on March 19, 2019, with the headline 'US regulator in line of fire for clearing aircraft'. Subscribe
Topics:
More
Whatsapp Linkedin FB Messenger Telegram Reddit WeChat Pinterest Print Copy permalink