WASHINGTON • United States intelligence chiefs have contradicted President Donald Trump's statements that the Islamic State in Iraq and Syria (ISIS) group has been defeated and that North Korea can be convinced to forgo its nuclear weapons.

In their annual report on security challenges to the country, the country's top spies also challenged Mr Trump's claim that Teheran is actively seeking nuclear weapons, the justification Mr Trump gave for withdrawing last year from a multilateral treaty on Iran.

The 42-page report said ISIS remains a potent threat in the Middle East as its leaders continue to encourage attacks on the West.

"ISIS still commands thousands of fighters in Iraq and Syria, and maintains eight branches, more than a dozen networks and thousands of dispersed supporters around the world, despite significant leadership and territorial losses," said director of National Intelligence Dan Coats in the annual Worldwide Threat Assessment report.

The militant group, which Mr Coats acknowledged had been reduced to "a couple of little villages left" in Iraq and Syria, will exploit any reduction in pressure from international coalition forces to rebuild its capacities for mounting attacks and for media promotion, US intelligence chiefs believe.

Mr Trump has repeatedly said in recent months that ISIS had been defeated, justifying his abrupt announcement last month that he would pull US troops out of Syria.

His Defence Secretary James Mattis resigned after that announcement in disagreement and US security experts have urged Mr Trump to not withdraw from Syria precipitously because ISIS fighters could fill the vacuum. 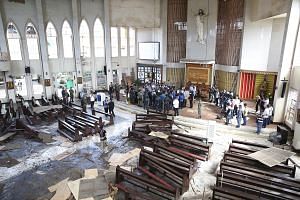 Mr Coats told the Senate Intelligence Committee on Tuesday the US intelligence community believes it is unlikely that Pyongyang will agree to completely denuclearise.

The directors of the Central Intelligence Agency (CIA), Federal Bureau of Investigation, National Security Agency and other intelligence agencies flanked Mr Coats at the hearing.

As for Iran, CIA director Gina Haspel told the hearing that the country is still abiding by the terms of the 2015 nuclear deal despite Mr Trump's decision to withdraw, claiming Teheran had broken it.

"At the moment, technically they are in compliance" with the Joint Comprehensive Plan of Action (JCPOA), she told the Senate Intelligence Committee.

"I think the most recent information is the Iranians are considering taking steps that would lessen their adherence to JCPOA as they seek to pressure the Europeans to come through with the investment and trade benefits that Iran hoped to gain from the deal," she said.

The intelligence chiefs also stressed that Russia had again tried to meddle in last year's mid-term Congressional elections and were poised to do the same in the 2020 presidential campaign.

Mr Coats said: "Foreign actors will view the 2020 elections as an opportunity to advance their interests."

He warned that Russia's social media efforts will continue to focus on aggravating social and racial tensions, undermining trust in authorities and criticising politicians perceived to be anti-Russia.

In a series of early-morning posts on Twitter, he said that ISIS "will soon be destroyed" and that there was a "decent chance of denuclearisation" with Pyongyang.

He said the intelligence chiefs were "extremely passive and naive" when it comes to the dangers of Iran.

"They are wrong!" he tweeted, adding: "Be careful of Iran. Perhaps Intelligence should go back to school!"

A version of this article appeared in the print edition of The Straits Times on January 31, 2019, with the headline 'US intel chiefs at odds with Trump on N. Korea, ISIS and Iran'. Subscribe
Topics:
More
Whatsapp Linkedin FB Messenger Telegram Reddit WeChat Pinterest Print Copy permalink