WASHINGTON • Companies in the United States are paying almost all the costs from US President Donald Trump's tariffs on Chinese imports, International Monetary Fund (IMF) researchers said in findings that contradict the President's assertions that China is footing the bill.

IMF researchers found that "tariff revenue collected has been borne almost entirely by US importers", according to the IMF's blog post released on Thursday.

"Some of these tariffs have been passed on to US consumers, like those on washing machines, while others have been absorbed by importing firms through lower profit margins."

The report concludes what most private economists have argued for months: China does not pay US tariffs; American consumers and companies do. "Consumers in the US and China are unequivocally the losers from trade tensions," it said.

It is rare for the IMF to disagree with its largest shareholder, and the paper was released just as the rhetoric in Mr Trump's trade war with China reached a boiling point.

Trade talks between Beijing and Washington stalled this month as Mr Trump accused China of backing out of a deal that was taking shape. 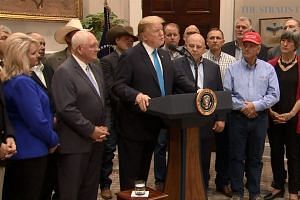 In response, Mr Trump increased levies on US$200 billion (S$275 billion) in Chinese imports to 25 per cent from 10 per cent, prompting retaliation from Beijing.

According to a separate report on Thursday from researchers at the Federal Reserve Bank of New York, the US' 15 percentage-point increase in tariffs will result in an annual cost of US$831 per American household, about double the bill on Mr Trump's tariffs last year.

The US has also released a list of about US$300 billion in Chinese goods that could face additional tariffs, including clothing, toys and mobile phones. Those levies, if imposed, would cover essentially all Chinese imports and hit a broader swathe of American households.

Earlier this month, White House economic director Larry Kudlow acknowledged that both sides will suffer from the widening US-China trade war, while predicting that the impact on American jobs and growth from higher tariffs on Chinese goods would be "de minimis".

On Thursday, China blamed Washington for wrecking the talks, and insisted the US must alter its "wrong practices" before negotiations can resume.

Financial markets, meanwhile, are slumping amid prospects of a long dispute between the world's two largest economies.

Co-written by IMF chief economist Gita Gopinath, the paper said a trade war that escalates with all the threatened tariffs will subtract about a third of a percentage point from global gross domestic product, "with half stemming from business and market confidence effects".

"This type of scenario is among the reasons why we referred to 2019 as a delicate year for the global economy," the IMF economists wrote.

Last month, the IMF cut its 2019 forecast for global growth to 3.3 per cent, the lowest since the financial crisis.

A version of this article appeared in the print edition of The Straits Times on May 25, 2019, with the headline 'US importers paying costs of tariffs on China: IMF report'. Subscribe
Topics:
More
Whatsapp Linkedin FB Messenger Telegram Reddit WeChat Pinterest Print Purchase Article Copy permalink