The new attack on Beijing brings the amount of goods hit by duties to more than US$250 billion, roughly half of Chinese exports to the United States, and increasingly consumers will feel the pain in their wallets directly.

Defiant in the face of increasing fears about the impact to the US economy, Mr Trump has threatened to go after 100 per cent of imports from China if the country refuses to change policies he says harm US industry, particularly the theft of American technology.

US Secretary of State Mike Pompeo said on Sunday that Mr Trump is not starting a trade war with China, but joining one already under way.

"The trade war by China against the United States has been going on for years," Mr Pompeo said on Fox News. "To the extent one wants to call this a trade war, we are determined to win it."

He added: "We're going to get an outcome which forces China to behave in a way that if you want to be a power - a global power - transparency, rule of law, you don't steal intellectual property."

Beijing responded with duties on US$60 billion of American goods, bringing the total to US$110 billion, nearly everything China buys from the US. 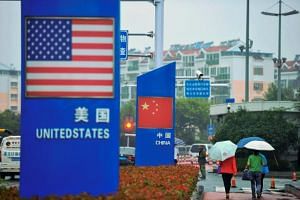 But Mr Trump warned he could ramp up to "phase three", slapping tariffs on approximately US$267 billion of additional imports, or the entirety of the goods the US buys from China.

Dialogue between the world's two biggest economies appears severed. Beijing cancelled the visit of a Chinese negotiating team expected on Sept 27 to 28 in Washington, The Wall Street Journal said.

In that context, the International Monetary Fund (IMF) has warned about the potential for "significant economic costs" including slower growth. "Should the escalation go further, the economic costs for both countries and around the world will quickly add up," IMF spokesman Gerry Rice said last week.

Meanwhile, Fitch Ratings has cut its growth estimates for China and the world for 2019. "Protectionist US trade policies have now reached the point where they are materially affecting what remains a strong global growth outlook," Fitch said in a report last Friday.

The latest round of Chinese imports will face 10 per cent tariffs through the end of the year, and then the rate will jump to 25 per cent.

A broad swathe of products is on the hit list - such as Chinese-made voice data receivers, computer memory modules, copiers, wood, textiles and food items.

After complaints from thousands of US firms - including powerhouses like Apple and Walmart - 300 product lines were dropped from the target list.

Walmart, the world's biggest retailer, also warned of the "detrimental impact" to consumers if tariffs were imposed on a number of products, but many of those, like handbags, haircare products, dog food and dog leashes, remained on the final list.

Analysts at Bloomberg Intelligence said a protracted trade war will fuel inflation in the US, particularly as tariffs are added to categories such as furniture, apparel and technology.

"Retailers are already facing a tidal wave of tariffs. This latest tranche is a tsunami," said Ms Hun Quach, vice-president of international trade for the Retail Industry Leaders Association in the US.

"With thousands of consumer products included, little warning, and no time to prepare, businesses are left scrambling."

A version of this article appeared in the print edition of The Straits Times on September 25, 2018, with the headline 'US consumers set to feel the pain in their wallets directly'. Subscribe
Topics:
More
Whatsapp Linkedin FB Messenger Telegram Reddit WeChat Pinterest Print Copy permalink