A total of 13 Brazilian babies whose mothers were infected with the mosquito-borne Zika virus while pregnant were described in a report by the US Centers for Disease Control and Prevention.

"Among these infants, 11 later developed microcephaly," said a CDC statement.

Seven of the 13 children had epilepsy, and "all had significant motor disabilities consistent with mixed cerebral palsy," said the report. 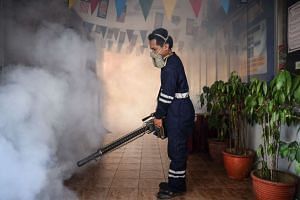 WHO declares end of Zika emergency but still needs action

The infants were studied for their first year of life, and were too young to evaluate for any intellectual deficits.

Researchers have known that Zika infection can cause microcephaly, and can also cause brain defects even without the appearance of microcephaly.

But the latest study shows the first laboratory evidence of Zika virus infection in the womb leading to microcephaly developing after birth.

"This report documents that microcephaly at birth is not an essential hallmark of congenital Zika syndrome," it said.

"Microcephaly might not be evident at birth but can develop after birth in infants with underlying brain abnormalities."

Not all infants born after exposure to Zika have developmental problems, and researchers said the current study sheds no light on how common the delayed onset of microcephaly might be.

However, they urged doctors to conduct prenatal brain scans on Zika-exposed foetuses, and the need for comprehensive medical and developmental follow-up.