NEW YORK (NYTIMES) - Mr Grant Thompson, a YouTube host known for the popular channel The King of Random, died in a paragliding accident in Utah this week, his family announced.

The authorities in Washington County responded to a call of an "overdue" pilot on Monday evening (July 29) after someone had tried to reach Mr Thompson on his cellphone, according to a Facebook post by the Washington County Sheriff's Office.

The caller, who was not immediately identified, provided the last known Global Positioning Satellite coordinates of Mr Thompson as of 9pm local time on Monday.

Several volunteers gathered and, with the help of a helicopter, they located his body.

"Detectives were able to recover the paragliding equipment along with a video recording device," the Facebook post said. "We are currently reviewing the video to determine factors which led to the aircraft crash."

Lieutenant Dave Crouse of the Washington County Sheriff's Office confirmed on Wednesday that the body was Mr Thompson's.

He said the body was with the medical examiner to determine an exact cause of death.

Mr Thompson's family wrote of his death on his social media pages on Tuesday.

"It is with great sadness to inform everyone that Grant Thompson passed away last night," read a statement posted to Mr Thompson's Instagram page.

"Grant had great love and appreciation for his fans," the statement continued. "We invite you to share your thoughts for Grant and the channel in the comments."

The message also asked fans to complete a "random act of love or kindness" in honour of Mr Thompson, who was 38.

"Grant's legacy will live on in the channel and the global community he created," the statement said. 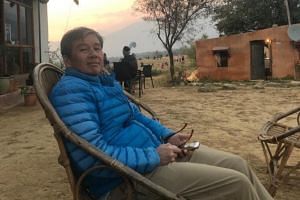 Mr Thompson rose to fame with his YouTube channel, The King of Random, which explored life hacks, experiments and random weekend projects. It had more than 11 million subscribers.

One of his most popular videos, How to Make LEGO Gummy Candy!, which was published in May 2015 and explored how to make your own candy at home, had more than 34 million views.

His most recent video, Rice Cake Raft! Will It Float?, was published on Sunday.

Other videos explored helpful hacks, with precise directions and a bit of science, like how to open a coconut without any tools or how to create your own stress ball using a sack of flour and party balloons.

Another popular video carefully explained how to make a laser-assisted blowgun for US$3 (S$4.13).

Before YouTube fame, Mr Thompson worked as an airline pilot for 11 years, according to a 2017 interview with the website Media Kix.

Then he went into the real estate business and bought and sold houses. He earned enough income to become semi-retired.

"Then I just started tinkering and learning about how the world works, which was inspired kind of by the idea of the Great Recession from the housing collapse," Mr Thompson said.

"I was learning about things. I started making videos on YouTube showing people what I was tinkering with and what I was coming up with."

As the channel grew, Mr Thompson opted to shut down his real estate business and quit flying.

The tributes and condolences poured in via comments on Mr Thompson's Instagram page.

"What a joy he brought to so many," she wrote.

Mr Lance Stewart, who hosts an eponymous YouTube channel, said Mr Thompson was a "true legend" and thanked him for all of his experiments and "amazing content".

He also tweeted two photos with Mr Thompson and said he "always had fun hanging out".

"He was such an inspiration to my life," read one comment. "Doing his projects on my own in high school and building those projects is what lead me to go into mechanical engineering. He was great inspiration to all, may he R.I.P."

Another person chimed in: "No he was one of the funniest and one of the best YouTubers I have ever watched and I learnt more science and other stuff through him rather than the school."