LOS ANGELES (AFP) - A worker at a privately-run centre for immigrant youths has been charged with 11 counts of sexual abuse involving teenage boys, according to court documents.

Levian D. Pacheco is alleged to have committed the offences involving boys aged 15 to 17 between August 2016 and July 2017.

ProPublica, the news outlet which first reported on the case, said on Friday (Aug 3) that Pacheco was 25-years-old and HIV positive.

The case was revealed amid a furore over the separation of parents from their children as part of President Donald Trump's crackdown on illegal immigration.

The separations caused a domestic and international firestorm, and in June the president reversed course.

Trump ordered an end to the separations, but as of last week's deadline, some 711 of the roughly 2,500 separated children were still not reunited with their parents.

According to the court documents, Pacheco is alleged to have sexually abused the boys while working as a youth care worker at a centre known as Casa Kokopelli run by the company Southwest Key in Mesa, Arizona. 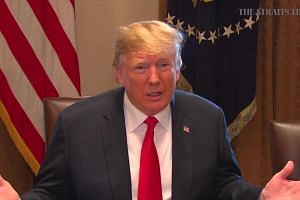 The victims were "unaccompanied minors in the United States being held in official detention." Pacheco is accused of performing oral sex on two of the victims and groping the genitalia of several others.

ProPublica said Pacheco, who has denied the charges, had worked at the centre since May 2016.

Southwest Key, a non-profit which runs the centre under a contract with the US Department of Health and Human Services, said its "number one priority" is to "keep the children in our care safe."

"Southwest Key Programs does extensive work to prevent all forms of abuse," the company said in a statement. "Our twenty-year history of taking care of children shows that when we see a problem, we report it, we fix it and we do it immediately."