WASHINGTON (REUTERS) - US House Speaker Nancy Pelosi announced on Wednesday (Jan 15) the seven members of the House of Representatives who will act as prosecutors to lay out the impeachment case against President Donald Trump in the Senate.

The House Intelligence Committee chairman, 59, has been a leading figure in the impeachment inquiry that preceded the House vote.

Schiff spearheaded an investigation that featured testimony from US officials about Trump's dealings with Ukraine, both in private and on national television.

He also has been a favourite punching bag for Trump and House Republicans.

A former federal prosecutor, he represents a district in the Los Angeles area.

The House Judiciary Committee chairman, 72, has been a Trump antagonist since he opposed a Trump real estate development in Manhattan decades ago as a New York state assemblyman.

Nadler's committee crafted the two articles of impeachment against Trump, which were approved by the House on Dec 18.

Lofgren, 72, has deep experience with impeachment.

She began her Washington career as a House Judiciary Committee aide when it held impeachment hearings against Republican President Richard Nixon in 1974.

Elected to the House in 1994 to represent a northern California district, she has served on the Judiciary Committee while it drafted impeachment articles against both Trump and Democratic President Bill Clinton in 1998.

Jeffries, 49, is considered a rising star in the party and a potential future House speaker.

Representing a district in the New York City borough of Brooklyn, he was the top House Democrat behind a bipartisan criminal-justice reform Bill that Trump signed into law in 2018.

Demings, 62, is the former chief of the Orlando, Florida, police department.

As a member of both the Judiciary and Intelligence committees, she has been involved in the impeachment investigation for months and knows the case against the president well.

Crow, 40, a first-term congressman from Colorado, is a former US Army Ranger who served three tours of duty in Iraq and Afghanistan and was awarded the Bronze star, one of the nation's highest military honours. 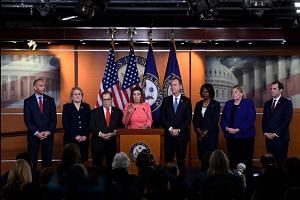 A lawyer in private practice before running for Congress, Crow defeated an incumbent Republican in 2018 to become the first Democrat to represent his district since it was created in 1981-1982 redistricting.

Crow is a member of the House Armed Services Committee.

Garcia, 69, is a member of the House Judiciary Committee and a former judge who represents a Texas district covering much of eastern Houston.

She is also a former controller for the city of Houston and a member of the Texas Senate.

As a member of the Judiciary Committee, the first-term congresswoman knows the impeachment case.