WASHINGTON (AFP) - The White House confirmed Sunday (April 14) it is looking at ways to transfer undocumented migrants to US sanctuary cities as Democrats accused President Donald Trump of creating "manufactured chaos" at the US-Mexico border.

"This is an option on the table," White House press secretary Sarah Sanders said in an interview on ABC's This Week.

Trump "heard the idea, he likes it, so - well, we're looking to see if there are options that make it possible and doing a full and thorough and extensive review," she said.

Sanctuary cities are jurisdictions in 27 US states that limit cooperation between local law enforcement and immigration authorities.

Many of the biggest are in Democratic strongholds like San Francisco, Los Angeles and New York, giving Trump's threats to launch the policy a menacing partisan edge.

The president revived the idea on Twitter and in comments to reporters on Friday, after the White House had said earlier in the week it was off the table.

Department of Homeland Security officials were reported to have pushed back against the transfers of undocumented migrants as illegal, impractical and counter-productive. 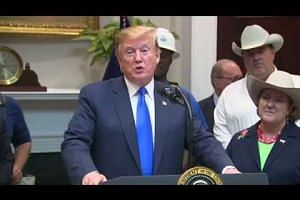 But in a tweet early Sunday, Trump insisted the US has "the absolute right to have apprehended illegal immigrants transferred to Sanctuary Cities".

"We hereby demand that they be taken care of at the highest level, especially by the State of California, which is well known (for) its poor management & high taxes!" he posted.

Trump has staked his presidency on his insistence that the United States is being overrun by migrants and asylum seekers.

But opponents, mostly in the Democratic Party, say his push for building more walls on the Mexican border and his almost daily denunciations of migrants as dangerous criminals incites racial hatred.

"This is again his manufactured chaos that he's created over the last two years on the border," Bennie Thompson, chairman of the House Homeland Security Committee, told ABC.