WASHINGTON (REUTERS) - Lawyers for US President Donald Trump told his Senate impeachment trial on Saturday (Jan 25) that Democrats' efforts to remove the president from office would set a "very, very dangerous" precedent in an election year.

White House Counsel Pat Cipollone, the head of the defence team, told senators they would be denying voters their right to give their opinion on Trump at the Nov 3 presidential election if they found him guilty and ousted him now.

In only the third presidential impeachment trial in US history, Democrats argued earlier this week that Trump should be removed for encouraging Ukraine to interfere in the election by pressuring its leader to dig up dirt on former vice-president Joe Biden, a leading 2020 Democratic presidential contender.

The defence tried to turn that election interference argument against the Democrats by warning against removing a president less than 10 months before the American people will vote on whether to give him a second term.

The Democratic-led House of Representatives impeached Trump last month on charges of abuse of power and obstruction of Congress, setting the stage for the trial in the Republican-led Senate.

Trump is expected to be acquitted in the Senate, where a two-thirds vote is required to convict and remove a president from office. No Republican senator has voiced any support for his ouster.

Democrats rejected Cipollone's concerns about impeaching a president in an election year.

"They argue that we must not impeach the president and remove him from office, because this would upset the election, and after all, there's another election coming up. That argument would say that the impeachment process does not belong in the Constitution," said Representative Jerrold Nadler, part of the team that presented the House case.

While the main thrust of the defence's argument on Saturday was to warn about the consequences of ejecting Trump from the White House, his lawyers also tried to chip away at the Democrats' portrayal of a president who put US national security goals at risk by trying to enlist a foreign country to help his own political career.

A major focus of the Democrats' case is a phone call last July in which Trump pressed Ukrainian President Volodymyr Zelenskiy to investigate Biden on unsubstantiated corruption allegations.

'I don't think the president's counsel did a very good job': Schumer

Democrats contend that Trump was trying to find dirt on Biden and his son Hunter Biden, who had served on the board of a Ukrainian gas company, to help the president win a second term.

Democratic Representative Adam Schiff, the head of the prosecution, told Senators this week that the campaign of pressure on Ukraine was a "corrupt scheme" in which Trump also temporarily froze almost US$400 million (S$540 million) in military aid to Ukraine.

Cipollone said removing Trump and taking him off the ballot in November would mean having to "tear up all of the ballots across this country on your own initiative, take that decision away from the American people."

"They are asking you to do something very, very consequential and, I would submit to you... very, very dangerous," he said.

Schiff wrote on Twitter that the defence was trying to deflect from discussing what witnesses have described as Trump's pressure campaign against Ukraine.

"They don't contest the facts of Trump's scheme. They're trying to deflect, distract from, and distort the truth. And they are continuing to cover it up by blocking documents and witnesses," he wrote. 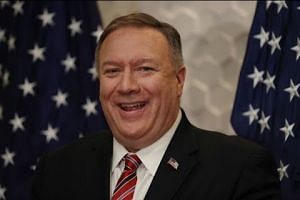 Mike Pompeo loses his temper with journalist over Ukraine questions

Mike Purpura, part of Trump's team, said most of the witnesses who testified in the House inquiry that led to Trump's impeachment had never actually spoken to the president.

Democrats counter that argument by saying the only reason the Senate did not hear from first-hand witnesses, such as former National Security Adviser John Bolton, was because Trump blocked them from testifying.

Trump's defence said on Saturday that subpoenas issued by Democratic-run committees for witnesses and documents in the inquiry were not valid, alleging that the probe itself lacked authority.

"All of those subpoenas were invalid," lawyer Patrick Philbin said. "That was the reason for not responding to them."

Saturday's session was relatively short because Republicans want to save the bulk of their arguments for next week when they expect television viewership to be higher.

No president has ever been removed through impeachment, a mechanism the nation's founders devised to oust a president for "treason, bribery or other high crimes and misdemeanours." One, Richard Nixon, resigned in the face of a looming impeachment.