The heated response came after China threatened to impose retaliatory tariffs on another US$60 billion in US exports, as the tit-for-tat trade war with Washington shows no signs of abating.

The Trump administration had earlier threatened additional tariffs of US$200 billion and has warned that it has more ammunition than Beijing in the escalating conflict.

Washington accuses China of not playing by the rules and stealing intellectual property.

"I might think the US$60 billion is a weak response to our US$200 (billion)," he said, while admitting that "there is a lot they can do to damage our companies in China".

But Mr Kudlow's toughest words came about the Chinese economy itself, which is second only to the US. 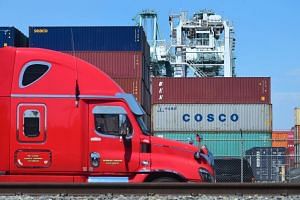 China threatens new tariffs on US$60b worth of US goods

"China is in trouble right now - their economy is lousy, investors are walking out, the currency is falling," Mr Kudlow said, in an unusually strong condemnation of a trading partner.

"Foreign investors don't want to be in China. I noticed today that Japan's stock market is now worth more than China's - I love that," he told journalists at the White House.