Chinese Vice-Premier Liu He is to meet his United States counterparts in Washington next week as the two sides work to resolve their trade disagreements by March 1, when a 90-day truce is due to expire, allowing US import duties on Chinese goods to increase sharply.

Washington and Beijing imposed tit-for-tat tariffs on more than US$360 billion (S$489 billion) worth of goods in two-way trade last year.

US President Donald Trump initiated the trade war because of complaints over unfair Chinese trade practices - concerns shared by the European Union, Japan and others.

The Financial Times and CNBC both reported on Tuesday afternoon that Washington had cancelled a preliminary meeting set for this week ahead of Mr Liu's visit.

American officials had reportedly cited a lack of progress on the most difficult issues in the trade dispute - including allegedly forced technology transfers and far-reaching structural reforms to China's economy.

The reports sent Wall Street even further into the red. US stocks had already opened lower on downgraded forecasts for global economic growth. 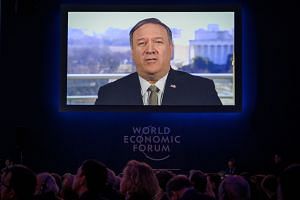 But, shortly before the close of trading in New York, top White House economic aide Larry Kudlow flatly denied the reports during an appearance on CNBC.

"With respect, the story is not true," Mr Kudlow said.

"There was never a planned meeting that was cancelled."

Stock prices recovered some of their losses following his remarks but still finished substantially lower for the day.

Mr Kudlow said the US continued to press the Chinese on the subject of intellectual property and state intervention in markets, among other matters.

He also said American officials were insisting that any agreement have teeth to ensure Beijing's compliance.

"Enforcement is absolutely crucial to the success of these talks," Mr Kudlow said.

"Will it be solved at the end of the month? I don't know. I wouldn't dare predict and want to make sure people understand how important that is to put it on the table."

If both sides fail to reach a resolution to the trade war, US duty rates on US$200 billion in Chinese goods are due to rise to 25 per cent from their current 10 per cent, a prospect that has shaken markets in recent months.

Last year, the Chinese economy posted its slowest annual growth in nearly three decades, according to official figures published on Monday in Beijing, underscoring concerns the trade conflict with the US could sap the strength of the world's second-largest economy and harm global growth in the process.