WASHINGTON (REUTERS) - The White House press conference on Monday (Sept 25) dominated by the battle of words between President Donald Trump and many of the country’s top athletes over kneeling during the national anthem.

“I think that it’s always appropriate for the president of the United States to defend our flag, to defend the national anthem, and to defend the men and women who fought and died to defend it,” White House Press Secretary Sarah Sanders said.

Trump kicked off his battle with the NFL at a political rally in Alabama on Friday, when he said any protesting player was a “son of a b****” who should be “fired.”

That triggered a historic Sunday of protests across the NFL with hundreds of players kneeling on the field during the national anthem. Others locking arms with owners in solidarity against in the president’s remarks.

By Monday morning, even the New England Patriots’ quarterback Tom Brady - described as a good friend of the president - calling Trump’s comments divisive on a morning radio show.

NFL commissioner Roger Goodell, along with the players’ union also rebuked the president.

The protest of kneeling started by former San Francisco 49-er Colin Kaepernick who last year chose to kneel during the anthem to protest police violence against African-Americans. 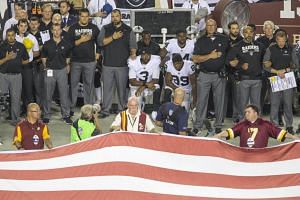 Basketball legend LeBron James who tweeted over the weekend that “going to White House was a great honour until you showed up!” saying the protests are not about disrespect of the flag and the US military, but about equality and saluting Kaepernick.

An NFL team has yet to sign Kaepernick this season.

However, on Monday, the White House insisted the president’s position is not about race.

“If the debate is police brutality then protest the officers rather than the flag,” said Sanders.