WASHINGTON (NYTIMES) - After a 31-year-old man used a cargo truck to crush 86 people to death on the promenade in Nice, France, in one of the worst terrorist attacks in Europe's history, his distraught father rushed to tell reporters his son had once suffered a nervous breakdown.

When Omar Mateen used a Sig Sauer MCX semi-automatic rifle to gun down 49 people at an Orlando, Florida, nightclub, relatives described him as bipolar.

And in Canada this week, after a 29-year-old man opened fire on a street full of cafes, hitting 15 people and killing two, his family issued a statement: Faisal Hussain, they said, had long struggled with mental illness.

The Islamic State in Iraq and Syria (ISIS) offered another explanation: All three men, it claimed, were its soldiers.

Not long after Hussain's family issued its statement, ISIS' news agency put out a bulletin claiming the attacker had been inspired by the terrorist group - and reigniting a debate about whether an individual who is mentally ill can truly be said to act at the behest of a terrorist group.

"Our son had severe mental health challenges, struggling with psychosis and depression his entire life," the Hussain family said. Its statement came a day after Hussain killed a 10-year-old girl and an 18-year-old woman.

No evidence has emerged to date to confirm that the man had been inspired by ISIS, and on Wednesday (July 25), both Toronto's police chief and an official with the National Security Ministry rejected any connection to terrorism. "At this stage, we have no evidence to support these claims," said police chief Mark Saunders. 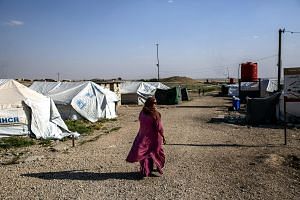 ISIS makes comeback in Iraq with switch to guerrilla tactics

In addition, the coroner told the family that Hussain had shot himself in the head after the rampage, according to a person close to the family. Committing suicide is considered a taboo among Islamist militants, and is another clue suggesting that Hussain may not have been under the militants' sway. The family had not detected any signs of radicalisation, the individual said.

While the path that led Hussain to violence remains unclear, and his link - if any - to extremism is unknown, one thing is beyond dispute: ISIS is extremely skilled at extending its reach by luring marginalised and vulnerable young men and women online.

Although in many instances the group has been hands-on, closely guiding those planning terrorist attacks via encrypted messages, it also employs another strategy. It broadcasts the seeds of propaganda as broadly as possible in the hope that they will take root, and that someone - anyone - will embrace violence in its name.

Researchers have found that a significant portion of the people who have carried out acts of terror in ISIS' name suffered from mental disorders. Close to a third of the 76 individuals involved in 55 attacks cited in a 2017 study by West Point's Combating Terrorism Centre were found to have a history of psychological instability.

Some of the best-known attacks linked to the terrorist group have been carried out by assailants who, at a minimum, displayed symptoms of mental distress.

Among them is the Nice attack in 2016, which was carried out by Mohamed Lahouaiej Bouhlel. His father went on camera to detail the psychiatric treatment his son had received following what he said was a nervous breakdown.

In Canada in 2014, after Martin Couture-Rouleau rammed his car into a pair of Canadian soldiers, killing one, his father said he had tried - and failed - to admit his son into psychiatric care.

"They let him out the next day because he didn't want to be there," Mr Gilles Rouleau told a Canadian newspaper.

Mental illness among attackers inspired by ISIS is so common that analysts have coined the term "loon wolf", a play on "lone wolf". But the term can be misleading.

"The 'loon' connotation also implies crazy or deranged and misses the fact that rational planning often occurs in the presence of a mental disorder," the West Point researchers wrote.

Still, the connection between terrorism and mental illness is not unexpected, experts say. Militant ideologies can offer a compelling narrative for people dealing with feelings of marginalisation or the paranoid fantasies of persecution that can exist among some with severe mental illnesses.

Some officials in countries targeted by ISIS have gone so far as to suggest that the militants seek out people who are mentally unwell. Among them is Mr Mark Rowley, who stepped down last year as chief of counterterrorism at London's Metropolitan Police.

The group, he said, is actively targeting vulnerable people, including "those with mental health issues".

In Australia, national counterterrorism coordinator Greg Moriarty once described how individuals were being drawn to ISIS' cause not only out of ideology but because of "mental health issues" that made them susceptible to the terrorist narrative.

The distinction between religious fanaticism and mental disorder is not always clear - and is not necessarily worth making.

"There are people who may want to frame this as a purely mental health event and not as terrorism," said Mr Mitch Silber, the former head of intelligence at the New York Police Department. "But making that line of demarcation is not necessarily accurate. It can be a bit of both."