WASHINGTON (WASHINGTON POST) - In the latest war of words between the United States and North Korea, Kim Jong Un did not pull any punches.

But he may have pulled out an old dictionary. "I will surely and definitely tame the deranged US dotard with fire," he declared in an unusually direct and angry statement published Thursday (Sept 21) by North Korea's official Korean Central News Agency.

The North Korean leader's warning about "fire," which echoed President Donald Trump's August statement threatening "fire and fury," was par for the course in their increasingly tense relationship.

But Kim's use of "dotard" was what raised eyebrows, prompting people around the world to Google the old-time insult.

Merriam-Webster defines the noun as "a person in his or her dotage," which is "a state or period of senile decay marked by decline of mental poise and alertness."

Urban dictionary, meanwhile, defines dotage as "a female's adams apple." The word trended on Twitter, and searches for the term were "high as a kite" following the release of Kim's statement, Merriam-Webster noted. 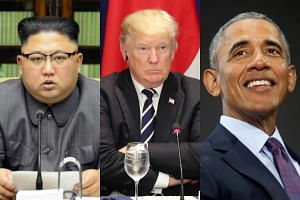 Dotard, covfefe and Snowmageddon: Words that politicians made viral

The word meant "imbecile" when it was first used in the 14th century and comes from the Middle English world "doten," meaning "to dote," according to Merriam-Webster.

The word was used by Chaucer in "The Canterbury Tales," and it appeared numerous times in William Shakespeare's work, including "The Merchant of Venice" and "King Lear."

In the book, "Shakespeare's Insults: A Pragmatic Dictionary," dotard is "linked to French radoter, which means to repeat things several times because one forgets." The world itself has become largely forgotten.

It was once a popular pejorative, in literature and beyond. It was used to insult Martin Van Buren, who preceded Trump in the White House by about 175 years, and by Union Army Gen. George McClellan to describe his Civil War predecessor, Gen. Winfield Scott, whom he did not like.

A front-page story in the July 25, 1854, edition of the New York Daily Times notes that one member of Congress (Sen. John Pettit) referred to another (Rep. Thomas Hart Benton) as a dotard.

According to Google's Ngram Viewer, which can search for words printed between 1500 and 2008, the use of "dotard" spiked in Shakespeare's time, then surged again in the 1800s before falling out of favour.

Now, thanks to Kim, "dotard" is back.

Kim used the insult not once but twice in his statement, which was a response Trump's address Tuesday to the United Nations General Assembly, in which the US president called Kim "Rocket Man" and threatened to "totally destroy North Korea."

Here is the first time Kim uses the term: "Action is the best option in treating the dotard who, hard of hearing, is uttering only what he wants to say."

And the second: "I will surely and definitely tame the mentally deranged US dotard with fire."

While the English version of Kim's statement calls Trump a "dotard," the Korean version actually calls him a "lunatic old man," according to Anna Fifield, The Washington Post's Tokyo bureau chief who covers North Korea.

An Associated Press reporter who was once based in Pyongyang noted on Twitter that she had been inside the Korean Central News Agency newsroom, where "they're using very old Korean-English dictionaries," which might explain how the arcane word wound up back in the news.

According to the AP, "dotard is a translation of a Korean word, 'neukdari,' which is a derogatory reference to an old person." It's worth noting that Thursday wasn't the first time anybody had referred to Trump as a dotard.

In May, writing in Esquire, Charles P. Pierce described the president as "a blundering dotard." On Thursday, Pierce tipped his cap to the North Koreans. "I would like to thank Kim for bringing 'dotard' back," Pierce wrote on Twitter.

Other Twitter users, predictably, had some fun with the suddenly trending term.

Conservative media analyst Mark Dice tweeted that "liberals are now siding with North Korea after he called Trump a #dotard (meaning an old, senile person). That figures. Liberals hate us." He added an American flag emoji to his tweet.