At 10am last Wednesday, as most of the Las Vegas strip is only just rousing, there is already a large, boisterous crowd gathered outside the gleaming golden tower that is Trump International Hotel.

Some 35 food trucks have lined up to form a "wall" as hundreds of protesters chanted slogans against the Republican nominee ahead of the final presidential debate in the city.

One has put on a giant papier mache head of Mr Donald Trump, another has fashioned a Trump hand puppet, while dozens others are wearing beauty queen sashes printed with "Miss Chubby" or "Miss Housekeeping" - names that the real estate tycoon have allegedly used against a former beauty queen.

Ms Maria Rosario, 53, a server in Planet Hollywood, says she is protesting Mr Trump's divisive policies like the proposed wall with Mexico. Ms Heather Lochart, 43, also a food server, says she is against the way Mr Trump treats his workers.

Mr Kyle Fitzpatrick, 28, a valet at a nearby hotel, has come with his five-year-old daughter because he doesn't like Mr Trump's remarks against women, while Mr Ernesto Saavedra, 40, who owns one of the taco trucks in the "wall", says he is giving out free food to show solidarity with his community. "I just think Hillary is more towards Latinos, so I'm going to be voting for her... I know with Trump, it is going to go down," says Mr Saavedra.

Across town, near the debate hall at the University of Nevada, a different group has gathered.

Healthcare consultant Mia Ha, 50, is standing with a giant Trump sign chanting slogans at the TV anchors who have set up nearby. She says she wants the government to stop meddling with her family business - a chain of Vietnamese pho restaurants - and thinks a businessman in the White House would be the best person to rejuvenate the economy. "Hillary Clinton says she's been trying to help people for 30 years. She cannot help. Businesses are closing because of the government," she says.

The gambling metropolis was hit hard by the global financial crisis in 2008 and business owners like Ms Ha feel that the government has not done enough to help. 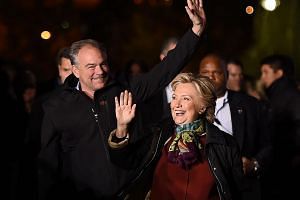 Mrs Constanza Areizaga, 53, who owns an entertainment company, says regulations like Obamacare have increased her costs. "I've had to cut back my employees. We are being taxed for this and taxed for that. We're feeling very frustrated."

The burst of political activity last week is unusual for a city primarily focused on leisure - one where it is not unusual to see bridal parties riding a roller coaster at midnight.

But it did reflect the challenges both candidates have in Nevada. Though in theory, it should be easier to run a campaign in a small state heavily focused on a single industry - three-quarters of the state's two million residents live in and around Las Vegas - neither candidate has found a clear winning argument.

And while the larger-than-normal Hispanic population helps Mrs Clinton, the high number of non-college-educated whites is good news for Mr Trump.

"There is an equal number of Democrat and Republican voters in this state, which makes it kind of a toss-up. Whichever candidate can get just a few more votes, can get all six electoral votes," says Dr Dan Lee, an assistant professor in the department of political science at the University of Nevada, Las Vegas. The US political system picks presidents not through the popular vote but through electoral college votes allocated to each state according to population. Whichever candidate gets 270 or more votes becomes president.

"If you think about Clinton, for her to win, let's suppose she loses a lot of the big swing states like North Carolina, Ohio and Florida but she holds on to the states that are more in her favour like Michigan, Pennsylvania and Colorado. Then all she needs to get 270 electoral votes to push her over the edge is one more small state. That's something like Nevada or New Hampshire."

Then there is what many Nevadans say is why their state is significant politically: Its diverse population makes it an accurate bellwether for the election.

At the moment, Mrs Clinton holds the edge there, with the RealClearPolitics average putting her ahead by 4.7 points and The New York Times giving her a 78 per cent chance of clinching the state.

But if that looks like Nevada is a done deal, there is one more quirk that will keep the state interesting all the way till polling day. While those lagging in the polls tend to reflexively cast doubt on the research, in Nevada they may actually have a point.

Drive away from the bright lights of the strip, through the rows of modestly kept, beige, single-storey houses in the suburbs of Las Vegas and it comes as little surprise that the percentage of owner-occupied homes here - 55 per cent - is 10 points lower than the national average and among the lowest in the country.

Pollsters who typically tend to find respondents based on their phone number area codes might miss out on the large number of transplants retaining numbers from their original home state. It is also often harder for researchers to figure out a respondent's likelihood of voting since many do not have voting records in Nevada.

Says Dr Lee: "People don't really settle down and develop roots within the community, so that has some impact on voter turnout... We are not exactly sure how accurate those polls are."

A version of this article appeared in the print edition of The Straits Times on October 24, 2016, with the headline 'Whatever happens in Vegas is a mystery '. Subscribe
Topics:
More
Whatsapp Linkedin FB Messenger Telegram Reddit WeChat Pinterest Print Purchase Article Copy permalink