Authorities said he smashed a car into a line of cars in an episode that left a 32-year-old woman dead and injured at least 19 other people who were protesting a rally staged by white nationalists.

Here's what we know so far about the suspect:

- Fields, 20, was born in Kenton, Kentucky, to Samantha Lea Bloom. He was living with his mother until "five or six months ago" when he moved to his own apartment in Maumee, Ohio, according to an interview Bloom gave to The Toledo Blade. They moved to Ohio from Kentucky about a year ago because of her job, she said.

- Fields' father died before he was born, aunt Pam Fields said in an interview. Pam Fields said she had not seen her nephew, whom she remembered as a "very quiet little boy", more than five times in the past 10 years.

- A friend and former neighbour of Bloom in the condominium complex where she lived until last year remembered her son as a quiet teenager who "kept to himself a lot." "He had some trouble in school making friends," said the friend, who requested anonymity because she said she feared for her safety.

"She had struggled with him during his teen years, but he came around towards the end of school," she said, adding that "she was always trying to do the best for her son."

- In an interview with The Associated Press, Bloom said she knew her son was going to a rally, but she tried to "stay out of his political views." She said she thought the rally "had something to do with Trump," adding that "Trump's not a supremacist." 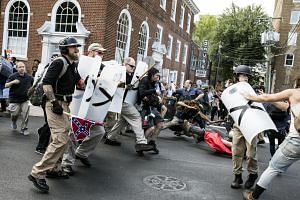 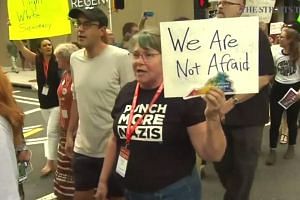 - Derek Weimer, 45, told The Cincinnati Enquirer that Fields was one of his students when he taught history at Randall K. Cooper High School. He described Fields as "a very bright kid but very misguided and disillusioned." When Fields was a freshman, he wrote a report for another class that was "very much along the party lines of the neo-Nazi movement," Weimer said.

"A lot of boys get interested in the Germans and Nazis because they're interested in World War II," he said. "But James took it to another level."

- Military records show that Fields entered the US Army on Aug 18, 2015, around the time his mother wrote on Facebook that he had left for boot camp. Less than four months later, on Dec 11, his period of active duty concluded. It was not immediately clear why he left the military.

- A photographer said he saw Fields on Saturday with symbols of Vanguard America, a group whose manifesto declares that "a government based in the natural law must not cater to the false notion of equality." The organization denied any ties to Fields.

"The driver of the vehicle that hit counterprotesters today was, in no way, a member of Vanguard America," the group said in a statement on its Twitter account. "All our members had been safely evacuated by the time of the incident. The shields seen do not denote membership, nor does the white shirt. The shirts were freely handed out to anyone in attendance."

- Fields was driving a Dodge Challenger "at a high rate of speed" in downtown Charlottesville at about 1.45 pm, a spokesman for the city said in a statement. He drove the car into a sedan, which hit a minivan that was in front of it.

The impact of the crash pushed the sedan and the minivan into a crowd of pedestrians. Fields fled the scene in the Challenger but was stopped a short time later by the Charlottesville police.

- Deia Schlosberg and Conrad Shaw, documentary filmmakers who were in Charlottesville to shoot footage of one of the counter-protesters, were nearby when the car barreled down the street. They said that it hit a number of people before crashing into the other vehicles.

"It seemed like it was trying to drive through the crowd," Schlosberg said. "The other cars were enveloped in the crowd. I bet those cars saved a ton more lives because it couldn't keep going."

- The city identified the dead woman as Heather D. Heyer, 32, of Charlottesville.