NEW YORK (NYTIMES) - For Malaysian factories that make light-emitting diodes, it is an opportunity. For US makers of outboard boat motors, it is a threat. For the biggest sellers of flat-screen televisions, it is a nuisance.

The emerging trade war between the United States and China has prompted predictions of severe economic and geopolitical disruption. But for any given industry, the impact of tariffs depends on the microeconomics of its products: How much does demand change when its prices rise? Are substitutes readily available? How much extra productive capacity is there around the world, and how long would it take to get new manufacturing facilities up and running?

"How this will play out is idiosyncratic to any given product and unique to each supply chain," said Daniel Rosen, partner at the economic research firm Rhodium Group.

"Nobody can honestly claim high confidence that they understand what the overall impact will be. You may as well project the weather on a Tuesday afternoon a year from now."

The United States imposed its first wave of tariffs over the spring, and each of the 1,102 goods that may be affected will end up with its own list of winners and losers.

To see how this may unfold, it's helpful to examine the different trade patterns for those goods, along with some of the thousands of comment letters that companies and industry groups have submitted to the US Trade Representative (USTR).

And executives and other experts have their own sense of exactly how supply chains might be rerouted and prices might swing for particular goods. 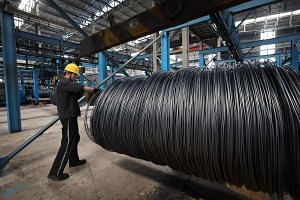 Window still open for US-China trade talks, but there's risk neither will back down

The lesson that emerges: Be sceptical of predictions of radical disruption to major industries in the near term. For now, companies have options to avoid some of the most severe risks.

But the longer the trade dispute lasts, the more products will get pulled into it. And the more the United States finds itself at odds not just with one other major economy but the entire world, the more it makes sense to worry. The workarounds that companies are using so far wouldn't succeed in an open-ended, indefinite trade war.

In LEDs, a Gap Other Countries Can Fill

China has the world's second-largest economy and is a major supplier of many of the products lining store shelves in the United States. The Trump administration's first round of tariffs is devised to focus on goods for which there are many other suppliers.

For about half the items, the share of US imports coming from China was less than 10 per cent, based on a new analysis of government data on the sources of the affected products conducted by the Peterson Institute for International Economics.

That figure was higher for some of the products that account for the larger share of imports, so China had a 23 per cent market share if you use a weighted average. Either way these are not markets where China has a monopoly or anything close to it.

Consider light-emitting diodes, the tiny part that makes LED light bulbs illuminate and are used in many industrial settings. The United States imported US$637 million worth of them from China last year, more than any other country. But that doesn't mean China is the only supplier. Japan and Malaysia exported an additional US$593 million in LEDs in the United States combined.

So for US companies that import the diodes and incorporate them in their products, such as solar-powered streetlamps, China isn't the only option. The question is whether other countries not subject to the 25 per cent tariff can accommodate a potential surge of demand.

"The trade war, I would say it will benefit us if it really keeps going in the direction of tariffs," said Daniel Fong, senior regional manager of Oversea Lighting and Electric, located 40 minutes from Kuala Lumpur.

"The US market is cutting off all ties to China, and in that sense we have a bigger opportunity to benefit the US market with Malaysia-made products."

The industry in Malaysia has struggled to make inroads in the US market, in part, said Jamie Fox, a lighting components analyst with IHS Markit, because China subsidises its LED industry.

A crucial machine needed for the manufacture of the diodes can cost US$2 million, but regional subsidies in China make them available for half as much, putting competitors outside China at a price disadvantage.

If tariffs make Chinese exporters less competitive, the balance may shift. John See, chief executive of QAV Technologies, said his company's two LED factories in Penang could quickly increase production 300 to 400 per cent, if demand were there.

Malaysia, he suggested, might no longer have to play "second fiddle" to China in business with the United States.

A Looming Threat for Boat Makers

It's easy for US importers to replace Chinese LED supplies with those made elsewhere because the parts are relatively standard; the issues are mostly price and availability.

But other Chinese products covered by tariffs aren't so easy for their importers to substitute.

Ray Electric Outboards in Cape Coral, Florida, imports its powerheads - the electric motors that turn the propeller for a small boat - from China. Shifting to a different supplier is no small matter.

"Have I tried different companies to get a different motor?" said Joy Hurley, business manager at Ray Electric. "Yes, but it's just not as readily available. There is nothing else that will work in our system."

The company has molds that are already made to fit the company's current suppliers' products, and it costs thousands of dollars to change them.

"The motors that I have as options in the United States don't fit in our housing," Hurley said. Meanwhile, the company's profit margins are too thin to absorb the cost of 25 per cent tariffs.

In the short run, she said, the company will need to raise prices to pass the tax through to customers.

The US boating industry has complained of many elements of the tariffs. Mercury Marine, for example, of Fond du Lac, Wisconsin, said in a letter to the USTR that it employs 4,800 American workers, but that the manufacture of 40-60-horsepower boat engines in Suzhou, China, is crucial to the enterprise.

"It's very difficult for some of these companies to absorb these costs entirely," said Nicole Vasilaros, senior vice president at the National Marine Manufacturers Association. Motors are one of 300 frequently used boat parts facing the tariff, she said, which cumulatively could mean a US$2,000 price increase on 14- to 16-foot vessels that generally cost in the low five figures.

Because boats are often bought for recreational purposes, their demand tends to be elastic - highly responsive to price changes. That means those higher prices may well translate into fewer people enjoying their summer in a new motorboat.

A Display of Flexibility With Flat-Screen TVs

Outboard boat motors and LEDs were both on the list for tariffs the Trump administration released this month. There is also something to learn from a product that wasn't.

Flat-screen televisions were on an earlier list of products targeted, before being spared after weeks of jockeying. But the supply chain for these devices illuminates the options all types of companies have for navigating around Chinese tariffs, and the ways that a trade war on all fronts carries greater risks for American consumers than one narrowly focused on China.

It will become particularly relevant if the dispute with China escalates and televisions again find themselves targeted - which, in recent days, has appeared more likely than not.

The manufacture of liquid crystal display televisions takes place in several steps. The liquid crystal is made in sophisticated factories that can cost billions to build. Those displays are then combined with other parts to make the backlight assembly, the innards of a TV.

The last step is the simplest and most labour-intensive: packing the backlight assembly into the plastic shell of a TV, along with other parts like speakers and buttons, and putting it all into a box where it can be shipped to store shelves.

The liquid crystals are made mainly in Japan, South Korea, Taiwan and China. The final assembly is done in many more places; many larger TVs sold in the United States are assembled in Mexico.

That shows the ways that savvy companies - which the giants of the TV business like LG, Sony and Samsung are - can avoid having the Chinese tariffs pinch. Shifting even more of their assembly to Mexico could allow them to avoid the tax even if it is expanded to encompass their products.

For example, LG has a facility in Reynosa, Mexico. Bob O'Brien, president of Display Supply Chain Consultants, said he suspected the company could expand production there to shift assembly work from China.

"It would be disruptive in the sense that they would have to change their plans, but they could hire more people in Reynosa, add additional shifts, maybe change production lines, relatively easily," O'Brien said.

Even if the company needed to open up new production lines, six months or so might be enough.

Imagine similar efforts across the TV manufacturing industry, and you can see that where the labour-intensive final assembly takes place might shift if Chinese tariffs were implemented, even if the highest-tech parts of televisions stay where they are.

The good news is that strategy would spare American consumers a 25 per cent tax; the bad news is it wouldn't do much to punish China and force it to the table to negotiate over broader American complaints.

Moreover, the strategy of moving television assembly from China to Mexico would be a way to avoid any Chinese tariffs only so long as the North American Free Trade Agreement keeps US imports from Mexico tax-free.

That points to one of the risks of the Trump administration's strategy of waging trade wars on multiple fronts. When only one country - even a big, important one like China - faces punitive tariffs, companies can find ways to mitigate the damage to their own profits and to consumers.

But if the United States simultaneously raises tariffs on much of the world, corporate strategists have less room to manoeuvre.

"Companies will try to find ways to reduce the cost of trade barriers," said Mary Lovely, a non-resident senior fellow at the Peterson Institute for International Economics.

"If you take away all their options, it's going to be much more detrimental to American corporations and American workers."

In other words, the impact of this first wave of China tariffs, while it will vary across different products for all sorts of reasons, may be manageable. A trade war with much of the world would be a different story entirely.