If there is a far and away best person in the White House to give Singapore an easier time, it would be Mrs Hillary Clinton.

The Democratic front runner has championed a stronger role for the US around the world, which dovetails with Singapore's desire for an American presence in the region to balance against China.

Mrs Clinton, 68, is also familiar to Singapore, having been in US politics for decades and made a visit here as US Secretary of State back in 2012.

The worst person would be Mr Donald Trump.

Going by the presumptive Republican nominee's speeches on the campaign trail so far, the 69-year-old looks set to turn America's attention away from foreign relations to focus on home. 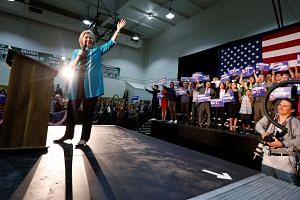 Asia ties after the US Elections 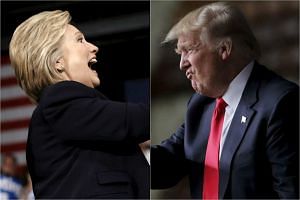 Next US President’s Asian agenda

Or he may rock the boat and shake up the United States' ties with key players such as China and Japan.

Either possibility would affect regional security.

Democratic dark horse Bernie Sanders, on his part, has publicly opposed free trade, which is critical to a small country like Singapore.

"All things considered, Singapore will likely find a Clinton victory the most palatable, albeit by no means perfect, of the three options," says international relations professor Tan See Seng of the S. Rajaratnam School of International Studies.

He explains that a Trump victory will be seen by Singapore as hugely problematic, because policymakers here view the Japan-US security alliance as a key pillar of the region's continued stability.

"Should Trump's 'America First' stance lead the US towards isolationism, the alliance could suffer, and the region along with it," says Dr Tan.

'America First' could also mean reprioritising US relations with Asean, which President Barack Obama has worked hard to strengthen.

"We welcome the American presence here for strategic reasons. It's in our interest to maintain a regional balance of power. We have been consistent on this, even before the rise of China," says National University of Singapore East Asia Institute fellow Lam Peng Er.

Mr Trump's presence in the White House could also spell a setback for the Trans-Pacific Partnership (TPP) free trade agreement, which Singapore has promoted vigorously.

The 12-nation agreement has not been passed by the US Congress.

It has, however, been slammed by Mr Trump, who has called for more protectionist tariffs on goods imported into the US. He may also relook the trade deal, which he sees as benefiting China.

Dr Tan calls this "a no-no for Singapore".

As for Mrs Clinton, she is a known entity to Singapore's leaders since her days as America's First Lady, then a US senator, and subsequently Secretary of State and the key architect of the US pivot to Asia, say analysts.

Moreover, she has publicly expressed concern over the downside of an American absence around the world, and suggested that bad things happen whenever the US does not take the lead, says Dr Tan.

"If that means a focused and sustained US leadership supportive of multilateralism - still unclear at this stage, it has to be said - that is likely a message Singapore will find easier to accept than those advanced by Trump and Sanders," he adds.

But a Clinton presidency will not necessarily be smooth sailing for Singapore. For one thing, Mrs Clinton has "a proclivity to talk tough against China over the South China Sea", says Dr Tan. She has also distanced herself from the TPP, which she promoted when she was Secretary of State.

But while a new president may want to reopen TPP negotiations, Dr Lam says he or she will likely be advised not to do so, let alone jettison the trade deal "because of the cost to US national interests".

"How can the US not be part of it? The TPP keeps America anchored in the Asia-Pacific, the growth region of the world," he says.

Mr Trump also may prove to be a very different man in the White House, say analysts who see him first and foremost as a pragmatic businessman.

"Cutting a deal involves negotiations, looking for win-win situations, and I think it's in Mr Trump's nature to be pragmatic," says Dr Lam.

"He may be full of bluster, but if you actually look at what he did as a businessman, he cut deals, and deals involve a willing buyer and a willing seller," he adds.

Analysts also expect him to moderate his rhetoric now that he is the presumptive Republican nominee.

"To compete for the White House, you must try to capture the votes in the centre," says Dr Lam.

Dr Tan says that Mr Trump is likely to be pro-business, and it is difficult to see him doing or saying things that would negatively affect US-Singapore economic ties.

Still, he is sceptical: "Trump could ultimately prove himself a pragmatist, but so far there is precious little in his campaign rhetoric that suggests that."

Pointing to how deeply the US is engaged in Southeast Asia and arguing that it would be difficult for the superpower to scale down its involvement here, NUS political scientist Bilveer Singh says: "When the dust has settled, it will be more business as usual and by the time the next person settles down in the White House, it will be time for the next election."

Like it or not, Singapore has no say in the matter.

As a small country, it will have to work with whoever is elected. Ambassador-at-large Bilahari Kausikan tells The Sunday Times: "The US is like the weather: we can't change it so we adapt to it.

"We will work with any administration."

A version of this article appeared in the print edition of The Sunday Times on May 15, 2016, with the headline 'What a Clinton or Trump presidency means for Singapore'. Subscribe
Topics:
More
Whatsapp Linkedin FB Messenger Telegram Reddit WeChat Pinterest Print Purchase Article Copy permalink