(THE NEW PAPER) - She was crossing the road in front of her apartment on campus on a rainy Thursday night when a car hit her and drove off.

Ms Renuka Ramanadhan, 20, a Singaporean undergraduate at the University at Buffalo (UB), is in critical condition after the hit-and-run accident in Buffalo, a city about 470km west of New York City, last week.

In a statement released on Saturday, UB said the accident happened in Hadley Road in front of the Hadley Village Apartments on the university's north campus, just before 10pm (11am on Friday in Singapore).

Ms Renuka was taken to Erie County Medical Centre, where she is still warded.

When contacted by The New Paper yesterday, her mother, who declined to be named, said Ms Renuka had to undergo immediate surgery.

She added that her daughter's condition is still critical but stable, though she has not regained consciousness.

"Right now, we are praying and concentrating on her recovery," she said.

In its statement, UB said that the university police are investigating the incident.

The vehicle believed to be involved in the hit-and-run has been identified as a 2003 to 2008 dark-coloured four-door Honda Accord, with possible damage to the front right bonnet, bumper, fender and head lamp, the university added.

It has appealed for anyone with information to contact UB police.

Responding to queries, a university spokesman told TNP that as of press time, university police are still searching for the vehicle involved.

Local news channel WKBW 7 Eyewitness News reported that Ms Renuka was hit by the car while crossing the road at a zebra crossing in Hadley Road.

UB police told the news outlet that she suffered a broken hip, a broken arm and severe brain damage. 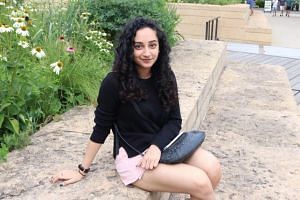 Interim UB police chief Chris Bartolomei said in an interview with WKBW: "It happened so fast and it was dark and rainy that most of the witnesses could only give us a vague description. But we are quite confident that at least we have some pictures of the vehicle."

UB said it is in close contact with Ms Renuka's family and friends and is providing assistance, including making arrangements for her family's stay in Buffalo, some of whom are already there.

The university added: "The entire UB community remains hopeful that she will make a full recovery from her injuries."

The Ministry of Foreign Affairs told The Straits Times that the Singapore Consulate in New York is in touch with Ms Renuka's family to render consular assistance.

According to a LinkedIn profile of Ms Renuka, she enrolled in UB last year as an accounting major.

Before going abroad to further her studies, she completed an accounting diploma at Singapore Polytechnic, graduating last year.