WASHINGTON (AFP) - Washington authorities said they will ramp up the capital city's emergency level when white nationalists and counterprotesters demonstrate on Sunday at the same park outside the White House.

The National Park Service said on Wednesday (Aug 8) it issued a permit for a rally in Lafayette Park by Unite the Right, the white supremacist network that organised a protest in Charlottesville, Virginia last year that turned deadly.

But the service said it has also issued a permit at the same park on the same day for counterprotesters, a move that appeared to raise the prospects of a violent clash right in front of the White House.

"Law enforcement's goal during the entire operational period will be to keep the two groups separated," DC Police Chief Peter Newsham told reporters, as he added a warning to anyone coming to the city threatening violence.

"If you come here with the intent to hurt someone or break something, we're going to put you under arrest," said Newsham.

All firearms will be banned from the protest site, including those legally carried by licensed gun owners, he stressed.

The second permit was issued to the Answer Coalition, a group that has called for "mass action" on Sunday to protest what it described as racists, fascists, neo-Nazis and white supremacists. 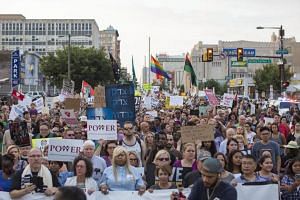 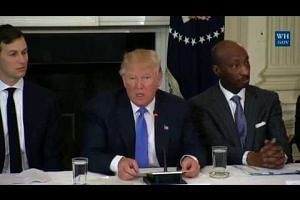 "We know that our responsibility is to protect First Amendment events, to protect Washingtonians and to protect our city, and we will do just that," she said.

The population of the US capital is nearly half black, according to the US census bureau.

Sunday is likely to be tense. It marks the one-year anniversary of the Charlottesville demonstration in which white supremacists and other far-right groups, angry over efforts to remove statues of Confederate leaders, clashed violently with counterprotesters.

One woman was killed and 19 injured when a 20-year-old man drove a car into a group of the counterprotesters.

President Donald Trump, in a low point of his presidency, blamed "both sides" for the bloodshed, a reaction that triggered astonishment among many and was widely seen as escalating tensions.

Newsham said the permit allowed for 400 demonstrators, and that overflow zones will be available should more protesters arrive.

"We would ask everyone who attends to not let their personal passions overcome their civility," he said.

Unite the Right said on its website that supporters will march from a nearby subway station to Lafayette Park at 5pm (5am on Monday, Singapore time). It also warned its followers not to bring guns or "engage in any fighting."