NEW YORK • The Governor of Virginia has acknowledged that he was photographed more than 30 years ago in a costume that was "clearly racist and offensive".

He admitted that he had dressed either as a member of the Ku Klux Klan or in blackface, but he has resisted a flood of calls for his resignation from national and state Democrats.

"I am deeply sorry for the decision I made to appear as I did in this photo and for the hurt that decision caused then and now," Governor Ralph Northam, a Democrat, said in a statement last Friday evening.

In a subsequent video, Dr Northam said he was "ready to do the hard work of regaining your trust" and was committed to staying in office "through the remainder of my term".

He issued his statement hours after the photograph - which was included on his 1984 yearbook page from Eastern Virginia Medical School and appeared alongside other pictures of himself - became public.

Neither person in the black-and-white photograph was identified, and Dr Northam, a paediatric neurologist, did not confirm which costume he had worn.

He faced intense pressure last Friday night to step down, as Democrats moved swiftly to send a zero-tolerance message to a governor whose 2017 election marked the party's most significant victory since losing the White House. 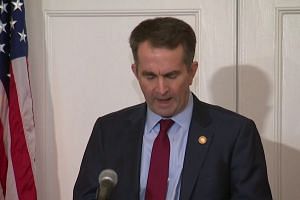 The first calls came from Democratic presidential candidates, some of whom had travelled to Virginia to campaign with Dr Northam just over a year ago.

By the end of the night, four senators - Ms Kamala Harris of California, Ms Elizabeth Warren of Massachusetts, Ms Kirsten Gillibrand of New York and Mr Cory Booker of New Jersey - and Mr Julian Castro, the former mayor of San Antonio, had all urged Governor Northam to resign.

The Virginia Legislative Black Caucus initially stopped just short of demanding his resignation, but after meeting with the governor, it said, "It is time for him to resign, so that Virginia can begin the process of healing."

If Dr Northam were to resign, Lieutenant-Governor Justin Fairfax would assume the governor's office.