Victims can seek damages for decades-old crimes; Catholic Church among those sued

NEW YORK • Hundreds of alleged victims of child sex abuse this week filed civil cases in New York State under a new law that allows them to seek damages for crimes going back decades.

The Child Victims Act extends the statute of limitations for victims of childhood sexual abuse.

It was approved by Governor Andrew Cuomo in February but opposed by the Catholic Church.

Victims of sexual abuse in New York were previously required to file civil lawsuits by their 23rd birthdays. Under the new law, alleged victims now have until age 55 for civil suits and 28 for criminal suits.

It also establishes a one-year litigation window for any victim, regardless of age, to take civil action.

The window may become a powerful lever for clergy abuse victims to find out how extensive the cover-up of sexual abuse was in the Catholic Church and whether top Vatican officials knew about it.

It is not known how many suits were filed across the multiple courts in New York State, which is home to 30 million people, including seven million Catholics.

The lawsuits involve defendants ranging from the Catholic Church to Rockefeller University in Manhattan and the Boy Scouts, as well as public and private schools and foster care groups. Each suit will try to show that individuals and institutions are liable because they failed to protect children from sexual abuse.

Lawyer Jeff Anderson said his firm was filing cases for more than 200 victims of abuse by clergy plus other cases against scout leaders, doctors and teachers. 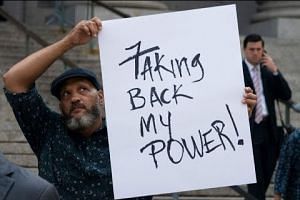 More US Catholics are considering leaving the church over the sex abuse crisis, poll says

"This is a momentous time for courageous survivors who have waited so long for justice in New York," Mr Anderson told a press conference on Wednesday.

"They now have an opportunity to take back power stolen from them when they were kids, and start to heal," he added.

Ms Jeanne Marron, one of Mr Anderson's clients who says she was sexually abused at a Catholic school for five years, said she had not believed the cases would ever come to fruition.

"I never thought I'd be here today," she said.

Ms Michelle Simpson Tuegel, a lawyer whose firm was filing cases against Catholic dioceses across New York, said the start of the look-back window was a crucial moment for sexual abuse survivors who previously had no recourse. The discovery process, she said, is crucial.

"It's about so much more than compensation," Ms Simpson Tuegel said. "It's healing to know that you're not alone, that they did make mistakes, that you were a child and adults failed to protect you, and that they're going to have to pay for that."

New York state courts designated 45 judges, including 12 in New York City, to prepare for an expected influx of lawsuits.

"(They) are critically important cases, raising numerous challenging legal issues, that must be adjudicated as consistently and expeditiously as possible across the state," chief administrative judge Lawrence Marks said in a statement on Tuesday.

Although many of the accused will be dead, the law allows victims to sue institutions. The lawsuits will also mark the first time that some alleged abusers will be publicly named, leading to a possible domino effect if long-silent victims see others step forward, and decide to do the same.

Since last August's publication of a grand jury report detailing decades of sexual abuse in Pennsylvania, many other states across the country have opened investigations to uncover abuses in the Catholic Church.