SAO PAULO (Reuters) - The United States is working with governments across Latin America to help prevent the spread of diseases like diphtheria and measles from Venezuela as refugees flee the chaotic country, US Health and Human Services Secretary Alex Azar said on Tuesday (Oct 2).

Azar, a former executive at drugmaker Eli Lilly and Co, said it was important to effectively treat infirm Venezuelan migrants before diseases like malaria spread through neighbouring countries.

"Disease knows no boundaries. And as we've had the complete collapse of the public health infrastructure in Venezuela and then migrants fleeing Venezuela to neighbouring countries, they're bringing their health conditions with them," Azar told Reuters during a stop in Brazil ahead of a G20 meeting of health ministers in Argentina this week.

"We're working with our health ministerial counterparts ... because we want to ensure that these individuals are vaccinated, that they get the care that they need, because we of course don't want measles to become endemic in the Western Hemisphere again. We don't want diphtheria to become widespread."

Venezuela is now in the fifth year of an economic crisis that has caused its healthcare system to collapse and sparked malnutrition, hyperinflation, and a migration crisis.

Refugees have ignited health emergencies in neighbouring countries, including in Brazil. Almost 300 cases of measles were recorded in the Brazilian border state of Roraima between February and early August, spurring the government to launch a nationwide campaign to vaccinate 11 million children.

While in Brazil, Azar visited a popular type of 24-hour health clinic known as a UPA, where patients can receive basic medical treatment. 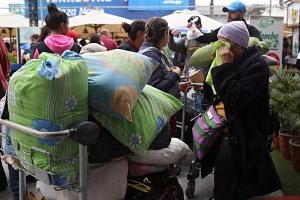 UPAs have helped reduce the number of hospital visits for patients whose issues can be dealt with locally. Azar said they could serve as a useful model for some US communities.

Brazil, particularly the nation's northeast, was hard-hit by the 2015-16 outbreak of the Zika virus, in which some infected pregnant women gave birth to children with abnormal smallness of the head, a condition known as microcephaly.

Azar said that collaboration between the United States and Brazil on developing a Zika vaccine continued.

He added that the United States and Brazil were to sign an agreement on Tuesday under which they would contribute 14 million reais (US$3.5 million) each for research next year into a range of diseases including dengue and AIDS.