Garner's death on a sidewalk during an arrest for allegedly selling untaxed cigarettes, and his gasped final words "I can't breathe" caught on bystander video, played a key role in the rise of the movement decrying excessive use of force by police officers against black men and teenagers in the United States.

Garner's family immediately criticised the decision clearing Daniel Pantaleo, the officer who put Garner in a chokehold, as a betrayal, and called for his dismissal from the police force.

The July 17, 2014 death of Garner, who was unarmed, and other high-profile police killings in cities including Ferguson, Missouri, and Baltimore, set off a wave of nationwide protests in 2014 and 2015.

"The death of Eric Garner was a tragedy," US Attorney Richard Donoghue said at a news conference following the Department of Justice decision not to charge Pantaleo or any other officers.

"The job of the federal prosecutor, however, is not to let our emotions dictate our decisions."

A lengthy Department of Justice review did not reach a conclusive determination as to whether Pantaleo wilfully committed misconduct, an "essential element" necessary to bring federal charges, a senior department official told reporters at a briefing in Washington.

US Attorney-General William Barr made the ultimate call, siding with federal prosecutors in Brooklyn, who had not wanted to charge Pantaleo, over the department's civil rights division, which had wanted to bring charges, the official said.

"The DOJ has failed us," said Garner's mother, Gwen Carr.

"Five years ago, my son said 'I can't breathe' 11 times, and today we can't breathe because they let us down."

Vanita Gupta, who served as the head of the US Department of Justice's Civil Rights Division under President Barack Obama and who previously oversaw the Garner case, criticised her successors' decision not to press charges.

"This is a travesty of justice," Gupta said in a statement.

"My heart breaks for Eric Garner's family, who deserved so much more."

A New York grand jury in 2014 declined to charge Pantaleo, who has been assigned to desk duty since Garner's death and faced a disciplinary trial in May at New York City Police Department headquarters.

A departmental judge is due to make her recommendations to New York Police Commissioner James O'Neill, who will then ultimately decide whether to punish Pantaleo.

He could lose vacation days or be fired. 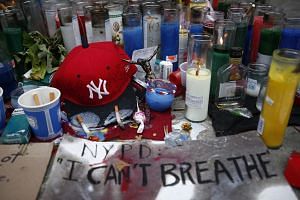 The NYPD said its disciplinary process on Pantaleo will not be affected by the federal prosecutors' decision.

The Civilian Complaint Review Board, the city oversight agency that prosecuted the departmental trial against Pantaleo, called the Justice Department's long-delayed decision "an utter travesty."

"Although Mr Garner's death was an undeniable tragedy, Police Officer Pantaleo did not cause it," PBA President Patrick Lynch said in a statement.

"Scapegoating a good and honourable officer, who was doing his job in the manner he was taught, will not heal the wounds this case has caused for our entire city."

The New York City chief medical examiner's office ruled that Garner's death was a homicide induced by "compression of neck (choke hold), compression of chest and prone positioning during physical restraint by police."

Pantaleo's lawyers have argued he did not use a chokehold, but instead used an authorised "seatbelt" hold that slipped as Garner struggled, and that the officer did not cause Garner's death.

"It is always a tragedy when there is a loss of life,"Stuart London, a lawyer for Pantaleo, said in a statement.

"Officer Pantaleo is gratified that the Justice department took the time to carefully review the actual evidence in this case rather than the lies and inaccuracies which have followed this case from its inception."

In 2015, New York City officials agreed to pay Garner's family an out-of-court settlement of US$5.9 million to resolve a wrongful death lawsuit.

Several Democratic contenders for the White House condemned the decisions, including New York Mayor Bill de Blasio, whom the Garner family denounced on Tuesday because he has not pushed for Pantaleo's dismissal.

"Years ago, we put our faith in the federal government to act," de Blasio said in a statement.

"We won't make that mistake again."