NEW YORK (Washington Post) - The Trump administration has escalated its rhetoric against North Korea, warning that time is running out for a peaceful solution between Kim Jong Un’s regime and the United States and its allies.

Administration officials said on Sunday (Sept 17) the risk from North Korea’s nuclear weapons program is rising, and underscored that President Donald Trump will confront the looming crisis at the UN General Assembly this week.

Trump, who spoke by phone with South Korean President Moon Jae In  on Saturday, referred to Kim on Twitter as “Rocket Man” and asserted that “long gas lines” are forming in the North because of recent UN sanctions on oil imports.

Though Trump’s top aides emphasised that the administration is examining all diplomatic measures to rein in Pyongyang, they made clear that military options remain on the table.

“If North Korea keeps on with this reckless behavior, if the United States has to defend itself or defend its allies in any way, North Korea will be destroyed,” UN Ambassador Nikki Haley said Sunday on CNN’s “State of the Union.”

“None of us want that. None of us want war. But we also have to look at the fact that you are dealing with someone (in Kim) who is being reckless, irresponsible and is continuing to give threats not only to the United States, but to all of its allies. So something is going to have to be done.”

The question remains, however, how realistic the Trump administration’s threats are as the North quickly advances its nuclear and ballistic missile capabilities. 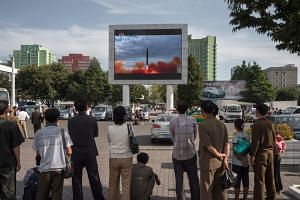 To shoot down or not? North Korea launch highlights intercept issues

Trump warned Kim last month that the North would feel the “fire and fury” of the United States if the regime continued its threats and destabilised the Korean Peninsula and East Asia. But Kim promptly responded with new threats and a round of new weapons tests.

Trump is scheduled to join Moon and Japanese Prime Minister Shinzo Abe at a working lunch on Thursday here in New York on the sidelines of the UN meetings to discuss North Korea, White House aides said. Yet Trump will not have the opportunity to meet with Presidents Xi Jinping of China and Vladimir Putin of Russia, both of whom are skipping the gathering.

Last week, Haley touted the UN sanctions on the North, saying that, if enacted, they will cut off 30 per cent of oil imports and curtail 90 per cent of Kim’s exports, putting a major economic pinch on a government that has long struggled to provide for the nation’s estimated 25 million people.

Yet Trump said last week that he and Secretary of State Rex Tillerson are skeptical that the sanctions will have a significant impact on North Korea’s nuclear ambitions.  Administration officials reaffirmed the United States’ long-standing policy that the North must agree to relinquish its nuclear arsenal as a prerequisite for direct diplomatic talks.

“He’s going to have to give up his nuclear weapons, because the president has said that he is not going to tolerate this regime threatening the United States and our citizens with a nuclear weapon,” national security adviser H.R. McMaster said on ABC’s “This Week.”  Trump, McMaster added, has “been very clear about that, that all options are on the table.”

At the same time, the administration signalled that it is not pursuing regime change, a position that could help persuade Beijing to play a stronger role in pressuring Kim. China facilitates about 90 per cent of North Korea’s trade and provides its oil.

Yet Tillerson said North Korea does not appear to be interested in denuclearisation talks. “I’m waiting for the regime in North Korea to give us some indication that they’re prepared to have constructive, productive talks,” he said on CBS’s “Face the Nation.”

“We have tried a couple of times to signal to them that we’re ready when they’re ready,” Tillerson added, “and they responded with more missile launches and a nuclear test. All they need to do to let us know they’re ready to talk is to just stop these tests, stop these provocative actions, and let’s lower the threat-level and the rhetoric.”

Many US allies in Europe and elsewhere are strongly opposed to any use of force that could further destabilise the Korean Peninsula and East Asia. The two unanimous UN Security Council votes for sanctions in recent weeks have marked a new level of alarm from those allies, as well as Moscow and Beijing.

But McMaster said Washington isn’t assuming the sanctions will work or buy time.

“We all have our doubts about whether or not that’s going to be enough,” he said, “and so we have to prepare all options. We have to make sure all options are under development to ensure that this regime cannot threaten the world with a nuclear weapon.”

Analysts have said the North has shown rapid improvements in its ballistic missile and nuclear technologies. Recent missile tests have demonstrated the range to potentially strike the continental United States, along with the technical capacity to mount a miniature nuclear device on a missile, analysts said.

That has accelerated the urgency in Washington, at the White House and on Capitol Hill.

Asked on CNN whether the Trump administration should continue to deny the North diplomatic talks until it ends its nuclear program, Senator Dianne Feinstein, Democrat-California, a member of the Senate Intelligence Committee, said no.

“I think that North Korea is not going to give up its program with nothing on the table,” she said. “I think that what could happen is that we could have reliable verification of a freeze of both the nuclear program and the missile arsenal, and that we could conceivably talk China into supporting that kind of a freeze, because it would carry with it no regime change and no war.”