SAN FRANCISCO (REUTERS) - The United States and Britain signed a cross-border data access agreement allowing each government to demand information around serious crimes directly from tech companies based in the other country, they announced on Thursday (Oct 3).

The two governments, joined by Australia, also signed an open letter to Facebook asking the company not to proceed with its plan to encrypt its messaging systems without first putting in place safeguards and ensuring court-authorised access for law enforcement.

The open letter to Facebook and its chief executive Mark Zuckerberg called on the company to suspend plans related to developing end-to-end encryption technology across its messaging services amid concerns about its impact on child exploitation and other criminal activity.

Mr Zuckerberg defended his decision to encrypt the company's messaging services on Thursday.

Speaking in a livestreamed version of the company's weekly internal Q&A session, Mr Zuckerberg said child exploitation risks weighed "most heavily" on him when he was making the decision and pledged steps to minimise harm.

Washington has called for more regulation and launched anti-trust investigations against many tech companies, criticising them over privacy lapses, election-related activity and dominance in online advertising.

Child predators have increasingly used messaging applications, including Facebook's Messenger, in the digital age to groom their victims and exchange explicit images and videos.

The number of known child sexual abuse images has soared from thousands to tens of millions in just the past few years. 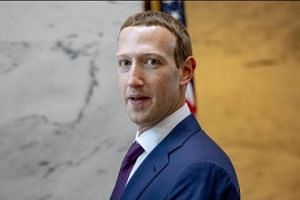 Zuckerberg meets Trump at White House with Facebook on the defensive

Speaking at an event in Washington on Wednesday, Associate Attorney General Sujit Raman said the National Centre for Missing and Exploited Children received more than 18 million tips of online child sex abuse last year, over 90 per cent of them from Facebook.

He estimated that up to 75 per cent of those tips would "go dark" if social media companies like Facebook were to go through with encryption plans.

Facebook said in a statement that it strongly opposes "government efforts to build backdoors", which it said would undermine privacy and security.

This approach "offers us an opportunity to prevent harms in a way that simply going after content doesn't", she said.

In practice, the bilateral agreement would empower the British government to directly request data from US tech companies, which remotely store data relevant to their own ongoing criminal investigations, rather than asking for it via US law enforcement officials.

The effort represents a two-pronged approach by the US and its allies to pressure private technology companies while making information sharing about criminal investigations faster.