WASHINGTON (NYTIMES) - Wonder Woman, the 2017 film that Steven Mnuchin helped produce before becoming Treasury secretary, hauled in about US$90 million (S$122 million) at the box office in China.

It was the film's most successful international market and a roaring success for an American superhero export. But because of China's strict laws for foreign films, the studio behind the movie, Warner Bros, received just a small fraction of those revenues.

Now, as Treasury secretary and one of the lead negotiators in trade talks with China, Mr Mnuchin has been personally pushing Beijing to give the American film industry greater access to its markets - a change that could be highly lucrative to his former industry.

While Mr Mnuchin divested from his Hollywood film-production company after joining the Trump administration, he maintains ties to the industry through his wife, actress and filmmaker Louise Linton.

In 2017, Mr Mnuchin sold his interest in the company StormChaser Partners to Ms Linton, who at the time was his fiancée. In his 2018 disclosure, which was obtained from the Treasury Department through a records request by The New York Times, StormChaser is listed as one of Ms Linton's assets.

Since they are now married, government ethics rules consider the asset to be owned by Mr Mnuchin. And while the documents show that Mr Mnuchin sold his stake to Ms Linton for US$1 million to US$2 million, he is now owed that same amount, in addition to interest, from StormChaser in 2026, according to the 2018 form.

Mr Mnuchin's remaining ties to the film industry are raising questions among ethics officials and lawmakers about whether a conflict of interest exists.

At a congressional hearing on Thursday (March 14), Mr Mnuchin was questioned by a top Senate Democrat about those continuing financial ties. The Office of Government Ethics still has not certified his 2018 financial disclosure, which is the first since his marriage to Ms Linton.

Access to China's film market has not been a primary issue in the trade talks, which have focused largely on Beijing's treatment of foreign companies, including its requirement that firms hand over valuable technology, its barriers to foreign business and its subsidies to Chinese firms.

But Mr Mnuchin has championed more equitable treatment of American films in China, viewing existing restrictions on foreign entertainment as part of the problematic behaviour the Trump administration is trying to correct. 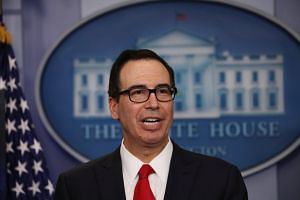 Under the current system, foreign companies must secure Chinese partners to enter China's market, and they are restricted in how much they can earn as part of the arrangements.

China applies a strict quota for the number of Hollywood films it lets into its theatres. For most box office showings, Chinese companies take in 75 per cent of all revenue, leaving the remainder to Hollywood.

To operate in the tightly managed Chinese entertainment sector, American companies have also had to form a vast network of complicated ties with Chinese state-owned firms.

Since the trade talks began last year, film lobbyists have met Mr Mnuchin's top deputies, as well as officials from the Commerce Department and the office of the US Trade Representative.

Mr Mnuchin has been especially responsive to lobbying from the film industry, according to people familiar with the discussions, given his background and understanding of the challenges that American moviemakers face in China.

"Secretary Mnuchin has been very much involved," Mr Lighthizer added. "He of course knows a great deal about that industry, a lot more than I do."

On Thursday, Senator Ron Wyden of Oregon, the top Democrat on the Senate Finance Committee, raised concerns about Mr Mnuchin's financial ties to the film industry and asked the Treasury secretary whether he had, in fact, really divested himself of the StormChaser asset listed on his disclosure form.

Mr Wyden also suggested that the transaction might have been more of a loan to Ms Linton than a true financial separation from StormChaser.

"What we have wondered is if there has been an exchange of an asset for a loan rather than a divestment," Mr Wyden said.

Mr Mnuchin declined to discuss details of the transaction, but said that his financial disclosures were certified by career ethics officials in the Treasury Department.

"I am advised by people at Treasury that I am fully in compliance and I have no ethical issues," he said.

When asked by reporters after the hearing why his StormChaser ties did not represent a conflict of interest, Mr Mnuchin said that he would not discuss any specific assets.

Treasury noted separately that his disclosure was certified internally on June 27, 2018, and that the department was working with the Office of Government Ethics to obtain its certification.

Mr Mnuchin and Ms Linton, who married in 2017, brought Hollywood glitz to Washington, but their continuing links to the film industry have also brought complications.

After working for 17 years at Goldman Sachs, Mr Mnuchin in the past decade became a big name in Hollywood as a film investor. His companies, Dune Entertainment and later RatPac-Dune, helped produce and finance dozens of films that were box office smashes in China, including Avatar, Gravity, Dunkirk, Wonder Woman and Ready Player One.

Mr Mnuchin was also a co-chairman of Relativity Media, a fledgling Hollywood studio that had a joint venture in China.

During his confirmation hearing in 2017, Mr Mnuchin said that Relativity's joint venture in China was "not particularly successful".

He agreed to divest from dozens of investments in early 2017, after he was nominated by Mr Trump. Later that year, he sent a letter of apology to the Office of Government Ethics after appearing to promote one of his movies when he said at an event: "Send all your kids to Lego Batman."

This month, the Centre for Public Integrity reported that Mr Mnuchin's most recent financial disclosure, which was Treasury approved last June, has yet to be certified by the ethics office. That has raised questions about the reason for the delay.

Ethics experts have pointed to Mr Mnuchin's continuing ties to StormChaser Partners as a potential reason for the hold-up.

"It certainly creates a significant appearance issue," said Ms Virginia Canter, a former senior ethics counsel at the Treasury Department. "Not just because he previously was in the entertainment business, and may in fact go back into it at some point when he leaves Treasury, but because his spouse appears to have holdings in these films and is part of the film industry and may benefit if favorable terms are negotiated with China."

While Mr Mnuchin's role in pressing for the film industry has raised some concerns, there is broad support in the US to push for changes to China's film regulations. The film industry supports more than two million American jobs, according to industry data, and Hollywood has been a powerful force for exporting American culture around the world.

"Even if concessions are made in trade negotiations, there's a long way to go, because the business environment continues to keep Hollywood from operating on an equal plane," said Ms Aynne Kokas, an assistant professor of media studies at the University of Virginia and the author of Hollywood Made in China.

Even for box office hits, Hollywood studios receive a quarter of ticket proceeds, with the rest going to Chinese partners. Increasing that to the global average, which is around 40 per cent, is one of the industry's biggest requests. Last month, Mr Lighthizer said that this was a "key issue" that "had not been resolved" in negotiations.

Mr Lighthizer also described restrictions on distribution as "complicated", saying: "There should be some changes there too, but what we haven't done is challenge control. It's not something we want to bring into this, the idea of challenging control in China."

In another congressional hearing this week, Mr Lighthizer reiterated that the US was renegotiating the amount of Chinese box office revenue shared with US firms, saying it was a "very unfair situation".

Like many other American industries, Hollywood has grown frustrated with China's pattern of promising to open its film market, only to fail to do so. As early as 2001, the World Trade Organisation urged China to open up its film market. An agreement between the two countries governing China's rules for Hollywood films expired in February 2017, and it has not been renegotiated.

Some lawmakers hope that Mr Mnuchin and Mr Lighthizer will be able to finally change that.

"This is our opportunity to even the playing field here to some extent," Representative Judy Chu, a member of the Ways and Means Committee, said in an interview. "The US film industry clearly has been at a disadvantage."