WASHINGTON (BLOOMBERG) - A United States Treasury official said there are no current plans to stop Chinese companies from listing on US exchanges, a day after a report that the Trump administration is discussing ways to limit US investors' portfolio flows into China.

"The administration is not contemplating blocking Chinese companies from listing shares on US stock exchanges at this time," Treasury spokesman Monica Crowley said in an e-mailed statement on Saturday (Sept 28).

Ms Crowley was responding to last Friday's Bloomberg News report on various measures under consideration by the US, including delisting Chinese companies from US exchanges.

The report unnerved markets, with the S&P 500 Index closing about 0.5 per cent lower. US-listed shares of China-based companies, such as Alibaba and Baidu, tumbled.

Other potential measures include limiting Americans' exposure to the Chinese market through government pension funds, and ways to put caps on the Chinese companies included in stock indexes managed by US firms, according to people familiar with and involved in the discussions. Ms Crowley's statement did not address or rule out any of those possibilities.

Administration officials have been examining their options for weeks, and the Treasury has been participating in inter-agency meetings chaired by Mr Larry Kudlow, the National Economic Council (NEC) director, the people said.

Still, the push largely comes from President Donald Trump's more hawkish aides, like White House trade adviser Peter Navarro, and outside advisers like Steve Bannon. The NEC and Treasury are wary of the market reaction and are working to ensure that any plan would be executed in a way that doesn't spook investors, the people added. 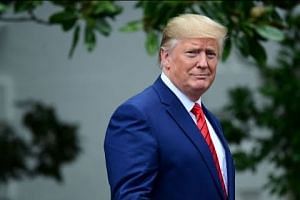 People close to the administration expressed annoyance last Friday at the discussions being publicised, contending that the White House hasn't decided on a course of action. They said the discussions were examining a wide range of options and were therefore not yet ready for public consumption.

Some advocates of a crackdown on financial flows within the administration said they saw the fact that the discussions were leaked as an effort by doves inside the White House to kill the potential measures by stirring up opposition.

President Trump has given the green light for the review, a person familiar with the deliberations said, but exact mechanisms or a timeline have not been worked out.

More dovish advisers involved in the discussions frame any action as necessary to create a level of reciprocity.

The administration's hawks argue that any US investment in Chinese companies, whether they are listed in the US or China, exposes investors to potential fraud as a result of poor Chinese corporate governance standards.

Some even say that the close relationship between the ruling Chinese Communist Party and many listed companies, whether formal or informal, means that any investment in them amounts to support for the party and even the People's Liberation Army. In their eyes, US investors are effectively underwriting Washington's biggest economic and strategic rival.

Hawks like Mr Navarro have in the past publicly accused Wall Street of seeking to undermine Mr Trump's efforts to rein in China's economy.

A bipartisan group of lawmakers - notably Senator Marco Rubio, a Florida Republican - have pushed for stronger investment restraints and greater scrutiny for Chinese companies in stock indexes and US pension funds.

The White House has been in touch with Mr Rubio to discuss the matter and could potentially support legislation he has put forward that would set up a process to delist Chinese companies from US exchanges for continued failure to comply with US laws. The prospects for the Rubio-backed legislation in Congress are unclear.