WASHINGTON (AFP) - The United States on Tuesday (Nov 13) branded the son of Hizbollah's leader a "terrorist" subject to sanctions as it offered rewards to capture three militants in Lebanon with close ties to Iran.

In a series of back-to-back actions, the US vowed to aggressively counter the regional ambitions of Iran a week after imposing sweeping measures intended to cripple the cleric-led country's economy.

It also marked a new US pressure tactic inside Lebanon, whose prime minister-designate, Mr Saad al-Hariri, has been at a political crossroads with Hizbollah - considered a terrorist group by Washington but also a major political faction among the communally sensitive state's Shi'ite Muslims.

The State Department declared Jawad Nasrallah, the son of Hizbollah's leader Hassan Nasrallah, to be a "global terrorist," meaning any US-based assets will be blocked and Americans will be forbidden from any transactions with him.

"Hizbollah's destructive actions have endangered the Lebanese people," Mr Nathan Sales, the US ambassador-at-large and coordinator for counter-terrorism, told reporters.

He accused Hizbollah - the only of Lebanon's political parties that did not disarm after the 1975-1990 civil war - of "effectively using civilians as human shields" by hiding missiles in population centres.

Sales also held up "Wanted" posters for three men in Lebanon for which the United States will offer US$5 million (S$6.89 million) for information leading to their location.

They included Hamas deputy leader Saleh al-Aruri, who is seen as the key liaison between the Palestinian Islamist movement and Iran and who lives in Lebanon.

The United States linked Aruri in particular to the 2014 murder of three Israeli teenagers in the West Bank including one, Naftali Fraenkel, who was a dual US-Israeli citizen. 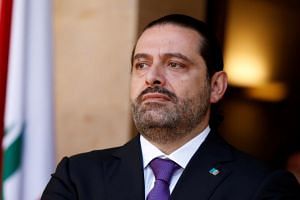 Israel in 'direct combat' with Iran after Syria raid: Hizbollah

Also on the posters were Khalil Yousif Harb and Haytham Tabatabai, both accused of commanding Hizbollah's growing military operations around the Middle East.

Iran's rival Saudi Arabia in 2015 imposed its own sanctions on Harb over Hizbollah's role in Yemen, where a Saudi-led coalition has been pounding Houthi rebels and infrastructure in what the United Nations calls the world's worst humanitarian crisis.

The United States cited the Saudi designation in its own action, despite Washington's recent criticism of the kingdom over the killing of dissident writer Jamal Khashoggi in its Istanbul consulate.

Hizbollah - founded during the civil war by supporters of Iran's revolutionary government with a goal of ending Israel's occupation of south Lebanon - has increasingly become a force around the region.

It is believed to have sent thousands of fighters to Syria in a bid to prop up President Bashar al-Assad, an Iranian ally and member of the heterodox Alawite sect who has ruthlessly tried to crush mostly Sunni rebels and the extremist Islamic State in Iraq and Syria (ISIS) movement.

The Treasury Department separately placed sanctions on four men it said were key to Hizbollah's activities in Shi'ite-majority Iraq.

The Treasury said Al-Zaydi was a key coordinator among Hizbollah, Iran's blacklisted Revolutionary Guards and their supporters in Iraq, and that the other three provided intelligence.

President Donald Trump's administration has vowed to roll back Iranian influence in the Middle East and last week snapped back sanctions, which had been lifted after Teheran entered a deal on ending its nuclear programme.

Mr Sales, using a figure previously cited by the administration, said that Iran pays US$700 million a year for Hizbollah.

"Sadly, it is the Iranian people who are forced to pay this price," he said.

Mr Hariri earlier on Tuesday accused Hizbollah of holding up a new Cabinet after five months of wrangling, with the group pushing for Sunni politicians allied to the Shi'ite movement, but opposed to Mr Hariri, to be represented.