WASHINGTON (Bloomberg View) - Justice Antonin Scalia will go down as one of the greatest justices in United States Supreme Court history - and one of the worst.

His greatness derived from his carefully articulated philosophy of constitutional interpretation, based on the law as a set of rules that should be applied in accordance with the original meaning of the document.

Yet on issues from race to gay rights to the environment, his reactionary conservatism consistently put him on the wrong side of constitutional law's gradual progressive evolutionary path. To put it bluntly, Justice Scalia's reasoning was almost always beautiful and elegant, but his results were almost always wrong. 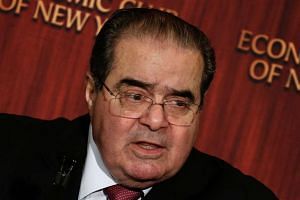 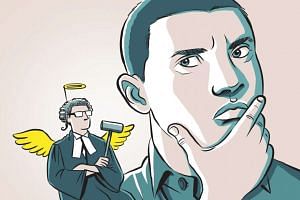 Why judges should not be moral arbiters

Justice Scalia, who died Saturday at 79, could be acerbic at a personal level. His biting humor often had a sarcastic edge, and he alienated Justice Sandra Day O'Connor by dismissing the quality of her analytic reasoning.

At the same time, one of my fondest memories is an afternoon spent drinking two bottles of red wine and eating pizza at A.V. Ristorante, a now-defunct Italian spot in Washington, with Justice Scalia and my fellow clerks for Justice David Souter, liberals all.

Justice Scalia was relaxed, warm and witty - charm itself, trading ideas and arguments and treating us with complete equality. I remember thinking that if this was the devil, he certainly assumed a most pleasing form.

Justice Scalia's jurisprudence had the tremendous virtue of being clearly stated with remarkable consistency. As he put it in the title of one of his most famous articles, he understood the rule of law as a law of rules.

In essence, this meant that all laws, whether statutes passed by Congress or the precepts of the Constitution, should be applied evenhandedly and without reference to results or changing circumstances.

The profundity of this vision can't be denied, even by people who don't agree with it - and I myself am such a person.

The core idea of law, after all, is that it treats everyone the same, rich or poor, white or black. Those of us who believe that laws written in general form must be interpreted to avoid producing unjust results must grapple with Justice Scalia's argument that we aren't really following the law at all.

Underlying Justice Scalia's conception of law and the Constitution was a vision of the limited, restrained job of judges: not to make the law just, but to apply it impersonally.

In this aspect, Justice Scalia was indebted to Justice Felix Frankfurter's theory of judicial restraint, which emphasised that Congress was expert in making laws and that its policy judgments deserve deference because they represent the will of the people.

In those circumstances, he was almost always convinced that the rule of the Constitution outweighed the principle of judicial restraint.

How, for example, can Justice Stephen Breyer's pragmatism ever be subject to withering critique, when his highest value is making the Constitution work in the concrete case before the court?

You might think there's nothing great about having a constitutional philosophy if it's the wrong one. But that's a mistake.

The justices of the Supreme Court exercise enormous power. That power is justified in a democracy only if it's part of a broader practice of debate about the meaning of the Constitution. That debate can't proceed in an intelligible way without clear theories of how the Constitution ought to be interpreted.

Even those who disagreed most with Justice Scalia over the years owe him an enormous debt for clarifying their arguments in the battlefield of reason.

Justice Scalia will be remembered mostly for his dissents, not his majority opinions. These he wrote partially for the newspapers, partially for future justices who might some day redeem them, and partially for law students.

He had been a law professor at the University of Virginia and the University of Chicago before joining the court, and understood that sharp formulations and clever phrasing help keep an opinion alive in the casebooks over the generations.

It's far more fun to teach his opinions than those of any other justice in the last quarter-century. In recent years, he took his love of the snappy phrase too far, and sometimes in writing seemed cranky rather than genuinely outraged. But his takedowns of high-flown constitutional phraseology will remain gems, like when he referred Justice Anthony Kennedy's famous paean to autonomy as the "sweet mystery of life" passage.

Because he rejected the idea of an evolving Constitution, Justice Scalia himself wouldn't see it as a tragedy if future generations have trouble coming to terms with his dismissal of gay rights or his impatience with affirmative action to improve racial equality.

Yet the historical reality is that, since World War II, the Supreme Court has mostly expanded fundamental rights, not contracted them. Standing in the way of constitutional progress is a good way to get remembered as a villain of history.

In my estimation, Justice Scalia came very close to achieving constitutional greatness. His intellect, his pen and his principles were of the kind possessed by the great justices of the past. His judgment, however, will very likely keep him from the first rank - at least in the judgment of history.