WASHINGTON (REUTERS) - The US Senate Judiciary Committee voted on Thursday (May 9) to approve President Donald Trump's deputy attorney general nominee, Jeffrey Rosen, an action that paves the way for a confirmation vote on Rosen by the full Senate.

The panel voted in favour of Rosen's nomination despite protests from Democrats, who argued that his lack of experience as a prosecutor should disqualify him from the job.

"We can't and shouldn't afford to have somebody who is learning on the job," said the committee's ranking Democrat, Dianne Feinstein.

If confirmed by the US Senate, Rosen will replace outgoing Deputy Attorney General Rod Rosenstein, who became one of the department's most high-profile deputies in recent history after he appointed Special Counsel Robert Mueller in May 2017 to probe Russian interference in the 2016 presidential election.

Mueller completed his investigation in March, in a report which did not find evidence of a criminal conspiracy between Trump's campaign and Russian government officials.

Mueller's report did not determine whether Trump obstructed justice, though it documented multiple episodes painting Trump's behavior in an unflattering light.

Rosenstein and Attorney General William Barr later concluded there was not enough evidence presented to prosecute Trump for obstruction. 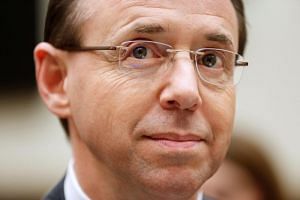 'Illegal and treasonous': Trump says Rosenstein was part of a 'coup attempt'

Rosenstein, who has decades of experience as a prosecutor, will be leaving his post at the end of this week and was to be honored in a farewell ceremony on Thursday.

Rosen currently serves as deputy secretary at the US Department of Transportation, and was recommended to Trump for the No. 2 post at the Justice Department by Barr.

Despite his experience in a managerial role, Rosen has never worked as a prosecutor.

Democrats in Congress have recently accused Barr of bending over backwards to protect Trump by painting the findings in Mueller's report in a rosier light. Many Democratic members of the Senate Judiciary Committee said Thursday they were concerned that Rosen could become yet another politically motivated Justice Department official.

"I believe that Mr. Rosen has demonstrated a history of partisanship that risks undermining the independence that we have so badly needed in our current political environment," Feinstein said.