WASHINGTON (REUTERS) - The US Senate Armed Services Committee on Wednesday (July 31) backed General John Hyten to be the second-highest ranking US military official, a day after he denied sexual assault allegations against him.

The vote was 20-7 in favour of Hyten being the vice chairman of the Joint Chiefs of Staff.

Hyten, the outgoing commander of the US military's Strategic Command, must still be confirmed by the full Senate.

A date for that vote has not been announced.

Hyten on Tuesday vehemently denied the sexual assault allegations against him at his confirmation hearing and received a strong endorsement from a senator who said she was raped while serving in the military.

His accuser, Army Colonel Kathryn Spletstoser, sat quietly in the room during the hearing, occasionally shaking her head in disagreement, and afterward told reporters that Hyten had lied to the senators under oath.

An official Air Force investigation did not substantiate the accusations against Hyten. Several lawmakers concluded after hearing from both Hyten and Spletstoser that the nominee had been falsely accused. 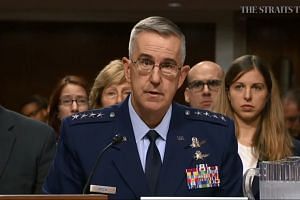 Hyten's nomination has posed a challenge to the Senate, which for years has criticized the military for failing to do enough to combat sexual assault in its ranks.