WASHINGTON (BLOOMBERG) -  President Donald Trump’s national security adviser said North Korea must accept inspections of its nuclear facilities and declare it is willing to give up its atomic weapons before the US will negotiate with its government.

National Security Council Adviser H.R. McMaster also said the Trump administration has gamed out “four to five” scenarios in which the North Korea nuclear threat is resolved.
“Some are uglier than others,” he said in a speech hosted by the Institute for the Study of War.
North Korea’s government claimed on Monday (Sept 25) that Trump had essentially declared war in a belligerent speech to the United Nations General Assembly last week in which he disparaged the country’s leader Kim Jong Un as “Rocket Man”.
Kim’s government said it had the right to shoot down US warplanes flying in international airspace as a result.
“What we hope to do is avoid war, but we cannot discount that possibility,” McMaster said. He said it would be “unacceptable” for North Korea to achieve a ballistic missile tipped with a nuclear warhead, technology the country has not yet demonstrated.

While McMaster said the threat from Pyongyang is "much further advanced" than anticipated and the Pentagon said the President has a "deep arsenal" to draw upon if needed, US officials dismissed North Korean Foreign Minister Ri Yong Ho's comment that Trump's warnings to Pyongyang at the United Nations amounted to a declaration of war.

"We've not declared war on North Korea," White House spokesman Sarah Sanders said on Monday (Sept 25). "And frankly, the suggestion of that is absurd. We continue to seek the peaceful denuclearisation of the Korean Peninsula."

Both governments have said "all options" are on the table in dealing with the tensions, but Ri escalated tensions with his remarks at the UN.  That startled markets, coming just days after the Pentagon sent planes near North Korea's border.

"The UN Charter acknowledges member states' right of self-defence," Ri said. "As the United States has declared a war, even though its strategic bombers don't cross our border, we will come to own all rights to respond for self-defence including shooting down its planes at any time."

B-1B Lancer bombers, based in Guam, and F-15C Eagle fighter escorts from Okinawa, Japan, travelled the farthest north of the demilitarised zone any US fighter or bomber aircraft have flown off North Korea's coast this century, Pentagon spokesman Dana White said last week in an emailed statement.

North Korea raised security on its eastern coastline after being surprised by the bombers, which weren't caught by its radar, Yonhap News reported, citing the head of the intelligence committee of South Korea's Parliament. 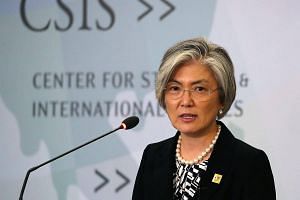 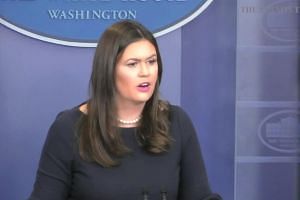 Angry rhetoric between US, North Korea could spark war: Analysts 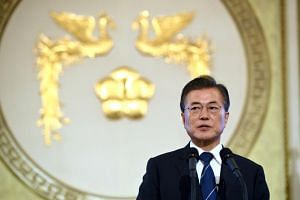 Military analysts say any conflict between the US and North Korea would risk a devastating attack by Pyongyang on the South Korean capital Seoul.

"There's not a 'precision strike' that solves the problem," McMaster, an Army lieutenant general, said at an event in Washington hosted by the Institute for the Study of War.

"There's not a military blockade that can solve the problem. What we hope to do is avoid war, but we cannot discount that possibility."

McMaster declined to comment on the extent to which North Korea's deeply-buried nuclear program was vulnerable to US military strikes - an assessment made of Iran before the 2015 framework agreement designed to stop its nuclear program.

He acknowledged that every military option assumed a reaction from North Korea that endangered South Korean citizens, adding it's "foremost in our minds." That danger "is certainly taken into consideration in all our planning and war gaming, table-top exercise efforts," McMaster said.

Kim Jong Un has accelerated his ballistic missile and nuclear weapons testing program. In response, the US has led two recent rounds of UN sanctions on the regime, winning support from China, North Korea's top trading partner, and Russia.

The US is "just now" beginning to see initial results of those sanctions, McMaster said, adding it's in China's best interest to ensure compliance with the restrictions. China would face "the prospect of a re-arming" in the region and enhanced military activities in South Korea and Japan. "There's a lot that's changed," he said.

In addition to the UN sanctions, Trump announced an executive order on Sept 21 that allows the US to impose a full trade and financial embargo on non-US banks, companies and people who do business with North Korea.

The Pentagon said its most recent bomber and fighter exercises were meant to underscore "the seriousness with which we take DPRK's reckless behaviour," White said last week, using the initials for North Korea's formal name.

"This mission is a demonstration of US resolve and a clear message that the President has many military options."

US stocks initially fell and bonds gained after Ri's comments, while the yen strengthened and gold climbed.

North Korea has responded to each round of UN sanctions with additional weapons tests, including a nuclear explosion - its most powerful so far - in early September that caused an earthquake with a magnitude of about 6.3.

Trump, in his debut speech to the UN General Assembly on Sept 19, threatened to "totally destroy" North Korea if it attacked the US or its allies. He mocked Kim with a taunt he'd first used on Twitter days before, saying: "Rocket Man is on a suicide mission for himself and his regime."

Ri, responding from the UN podium last week, said: "The very reason the DPRK had to possess nuclear weapons is because of the US."

North Korea's state media also issued a statement on Saturday from the National Peace Committee of Korea describing Trump as "wicked" and "a rabid dog."

North Korea and South Korea, a key US ally, have technically remained at war since the 1950s, with Kim's regime saying an armistice agreement is invalid. On Sept 22, Kim issued an unprecedented statement for a North Korean leader aimed at Trump, using the first person in several parts to attack the US president.

"Now that Trump has denied the existence of and insulted me and my country in front of the eyes of the world and made the most ferocious declaration of a war in history that he would destroy the DPRK, we will consider with seriousness exercising of a corresponding, highest level of hard-line countermeasure in history," Kim wrote in comments carried by state-run media.

In 1969, President Richard Nixon considered tactical nuclear strikes after North Korea shot down a US reconnaissance plane, according to documents declassified in 2010 and published by the National Security Archive.