UNITED NATIONS, United States (AFP) - The United States on Wednesday (Sept 6) demanded an oil embargo on North Korea and a freeze on the foreign assets of leader Kim Jong-Un, in a dramatic bid to force an end to the perilous nuclear stand-off.

A draft US-authored resolution submitted to the UN Security Council would go far beyond seven previous rounds of sanctions – and would rock Kim’s isolated authoritarian regime.

The draft, obtained by AFP, demands not only an oil embargo and a freeze on any assets Kim holds abroad, but also a ban on textile exports and an end to payments made to North Korean guest workers.

China has long been reluctant to take measures that could trigger instability or a refugee exodus on its frontier, and Russian has already dismissed calls for an oil embargo.

US President Donald Trump, who has recently been waging a fiery war of words with Kim, on Wednesday insisted that military action against North Korea’s nuclear program is not his first choice and pushed for a diplomatic option. 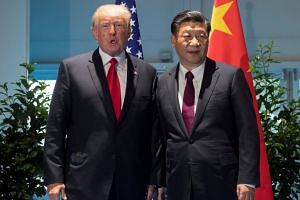 After Kim’s pariah regime claimed it carried out a hydrogen bomb test over the weekend, US officials have urged the UN Security Council to vote on new sanctions as early as next week.

Russia, which is locked in bitter disputes with Washington on many other fronts, has opposed that idea and Putin did not appear moved by Moon’s entreaties.

Both the Russian and South Korean leaders urged action to resolve the crisis as quickly as possible, and agreed that Kim was wrong to pursue banned missile technology.

But Putin was unenthusiastic about Moon’s calls for Russia to cut off oil supplies.

“In order to compel North Korea to come to the dialogue table, UN sanctions must be strengthened,” Moon told Putin, a South Korean spokesman told the Yonhap news agency.

“Now it is inevitable to cut off oil supplies to the North, we hope Russia will cooperate as well,” he continued.

The South Korean presidential spokesman quoted Putin as saying that Russia was concerned a block of fuel oil supplies would hurt civilians – including hospitals.

And Putin reportedly argued that Russia exports a negligible amount of oil to North Korea – about 40,000 tonnes a year.

Putin stressed the need for a political solution, saying further sanctions and pressure would not solve the problem.

“Today, as never before, everyone needs to show composure and avoid steps that lead to an escalation of tensions,” he said.

“It would be extremely difficult to advance the situation at hand without political and diplomatic instruments,” he said.

“It is not worth giving in to emotions and driving North Korea into a corner.”

The renewed diplomatic push could not disguise the mounting tension, underscored by China conducting air force drills to defend its east coast “against nuclear and biological weapons.”

Trump contributed to the atmosphere of foreboding last month when he threatened to respond to North Korea with “fire and fury.” But with Kim’s nuclear and missile programmes apparently in an advanced state and hundreds of artillery pieces aimed at the South Korean capital Seoul, his options are limited.

When asked Wednesday about military action, he said: “Certainly that’s not our first choice, but we will see what happens.” .

Trump’s comment came after he spoke with Xi of China, the country seen as having the most influence on its unruly neighbor and key to getting any sanctions regime to stick.

“I believe that President Xi agrees with me 100 percent. He doesn’t want to see what’s happening there, either. We had a very, very frank and very strong phone call,” Trump said.

According to the White House, Trump and Xi “committed to strengthen coordination and take further action with the goal of achieving the denuclearisation of the Korean Peninsula.”