WASHINGTON (REUTERS) - The United States could remain in the Paris climate accord under the right conditions, Secretary of State Rex Tillerson said on Sunday (Sept 17).

President Donald Trump was willing to work with partners in the Paris agreement if the United States could construct a set of terms that are fair and balanced for Americans, Tillerson said on the CBS Face The Nation programme.

"The president said he is open to finding those conditions where we can remain engaged with others on what we all agree is still a challenging issue," Tillerson said.

Trump administration officials said the United States would not pull out of the agreement and had offered to re-engage in the deal, the Wall Street Journal reported on Saturday.

US officials attended a meeting on Saturday of ministers from more than 30 of the nations that signed the climate-change agreement.

Trump announced in June that he would withdraw the United States from the 2015 global climate pact, arguing it would undermine the U.S. economy and national sovereignty. The decision drew anger and condemnation from world leaders. 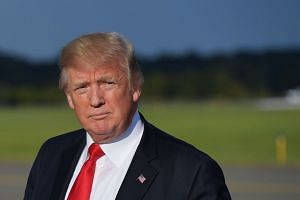 US insists it is withdrawing from Paris accord, unless terms change

"So I think the plan is for director Cohn to consider other ways in which we can work with partners in the Paris Climate Accord. We want to be productive. We want to be helpful," said.

Similar sentiments were expressed on Sunday by national security adviser HR McMaster, who said on ABC's This Week program that Trump was open to "any discussions that will help us improve the environment."

"He left the door open to re-entering at some later time if there can be a better deal for the United States," said McMaster. "If there's an agreement that benefits the American people, certainly."

The accord, reached by nearly 200 countries in 2015, was meant to limit global warming to 2 degrees or less by 2100, mainly through pledges to cut carbon dioxide and other emissions from the burning of fossil fuels.